Ex-military pilot Nadiya Savchenko considered a hero to some, a traitor to others 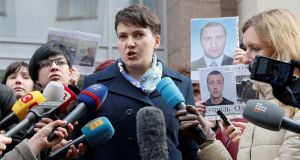 Nadiya Savchenko: The controversial pilot has rubbished as “a complete lie” a report that she claimed Ukraine would be better under Vladimir Putin. Photograph: Valentyn Ogirenko/Reuters

When Ukraine’s president, Petro Poroshenko, welcomed former military pilot Nadiya Savchenko home from captivity in Russia, he stressed the symbolism of her first name, which means “hope” in Ukrainian.

“For 709 long days, we have worried, prayed, actively worked and organised protests so that this day could come. The day when hope returned to Ukraine – Nadiya Savchenko and hope and strong faith in our victory,” Poroshenko declared last May.

“Just as we have brought Nadiya back, so we will bring Donbas and Crimea back under Ukrainian sovereignty,” he pledged, referring to the eastern area now partially held by Kremlin-backed militia and a peninsula annexed by Russia in 2014.

Savchenko looked impatient with the formalities and florid speeches, her glower at times only a little less fierce than the one she had worn in the defendant’s cage of a Russian courtroom, during hearings that she enlivened by singing Ukraine’s national anthem and flipping her middle finger to the judge.

The steel that Savchenko showed during her show trial over the death of two Russian journalists in Donbas was evident at her homecoming, along with a flare for the unexpected: After the presidential jet landed at Kiev airport, she emerged barefoot to deliver a speech of blistering patriotic fervour to a scrum of cameras and journalists.

The media proclaimed her Ukraine’s Joan of Arc; the nation’s leaders eyed a potentially invaluable ally or dangerous new rival; and no one knew what to expect.

Nine months on, Ukraine is deeply divided over the pilot, and she claims to be in the crosshairs of the elite that publicly hailed her as a symbol of hope.

Last Friday, Savchenko (35) slipped into separatist-held territory near the Russian border, where fighting has killed some 10,000 people and displaced about 1.5 million since spring 2014. Her visit was not approved by Poroshenko, the government or its security services.

Savchenko says she visited Ukrainian troops and civilians jailed by the militants, but critics accuse her of undermining Kiev’s opposition to direct talks with the “terrorists” and of handing a propaganda victory to the separatists and Russia.

Russian tabloid Komsomolskaya Pravda quoted Savchenko as saying she had fired guns on a test range with the separatists and found them to be “lovely lads” who could live without any problem in a reunified Ukraine. She also supposedly said Ukraine would be better under Russian president Vladimir Putin than Poroshenko.

“It’s a lie – a complete lie,” she said of those reports on Tuesday, insisting that she had crossed the front line on a humanitarian mission and had found six people in a separatist-controlled jail whose whereabouts were previously unknown.

“Of course Russia gave permission” for the visit, she added. “Of course, the security and transport for me were organised at the local level by [separatists]. But it’s all the same to me how it happens, because we’ll do whatever we have to” to free Ukrainians from captivity.

Savchenko says prisoner exchanges are stymied by the same corruption and incompetence from political leaders and the security services that hamper all Ukraine’s efforts to implement reform, fight graft and protect its territory.

Like many soldiers at the front, she sees Russia as her nation’s main foe, followed by a venal Ukrainian elite who value their own privileges over the national interest.

“I didn’t commit any crime because occupied Donbas is Ukrainian territory,” Savchenko declared. “The crime is committed by those authorities who for three years haven’t made clear who we are fighting with and who we are trading with, and who couldn’t stop the deaths of our people on both sides.

“And now these authorities are trying to destroy me,” she added, claiming to have been the target of several murder plots.

Many Ukrainians criticised Savchenko’s visit to separatist-held territory just as they did her unauthorised meeting with militant leaders last December, after which she was expelled from her parliamentary party.

Some deputies even accuse her of being a Russian agent who was “turned” in jail, and is now working to legitimise the separatists while stirring discord and undermining Ukraine’s authorities.

Others, such as Georgiy Tuka, a senior Ukrainian official dealing with militant-held areas, believes Moscow is exploiting Savchenko’s actions to push for direct talks between Kiev and the separatists, and to portray the conflict as a civil war that does not involve Russia.

Savchenko’s “actions and statements harm the interests of the Ukrainian state,” Tuka said. “Is she doing it consciously, or are they manipulating her actions? Probably the latter.”

1 Pricewatch: Left on the shelf - what we are no longer buying
2 Ireland’s coronavirus restrictions may lift more quickly if case numbers keep falling
3 Coronavirus: 35,600 people returned to work last week after receiving unemployment payment
4 Tax on Covid-19 payment could cause 'terrible shock' late in year
5 Archaeologists are ‘quite sure’ they have found Red Hugh O’Donnell’s burial place
Real news has value SUBSCRIBE