For a forgotten village, Marine Le Pen ‘keeps her word’

Marine Le Pen is the first of the major French presidential candidates to visit the annual Paris agricultural show, hoping to convince farmers to back her in the forthcoming election. Video: Reuters 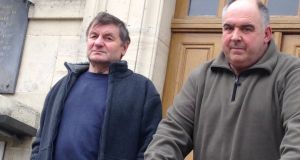 Alain Philippe and Gérard Marchand, the deputy mayor and mayor of Brachay. “I’m not a racist, but you ask yourself if you’re in your own country,” Marchand says. Photograph: Anne-Elisabeth Crédeville 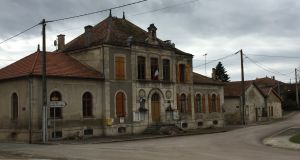 Main Street in hard-luck Brachay, where there is no doctor, shop or chemist. Photograph: Lara Marlowe

There’s a special place in Marine Le Pen’s heart for Brachay. The village gave the leader of the extreme right-wing Front National (FN) her highest score anywhere, ever, when 72 per cent of its inhabitants voted for her in the first round of the 2012 presidential election.

Brachay, in the Haute-Marne department of eastern France, has lost five residents since then, reducing its population to 60. All indications are that they will vote en masse for Le Pen in the presidential election’s first round on April 23rd, and in a probable run-off – almost certain to feature their candidate – on May 7th.

Six of the seven town councillors belong to the FN; the seventh, his colleagues tell me, “is turning”.

While polls show that most French people still regard the FN as “a danger for democracy”, Le Pen’s loyalty to Brachay is its greatest source of pride.

Journalists from around the world flocked here in 2012 to learn what motivated FN voters. French media were the most condescending, says the mayor and owner of the last family farm in Brachay, Gérard Marchand (58): “They said we were good-for-nothing backward peasants.”

To appear on the ballot, a presidential candidate must obtain 500 endorsements from mayors. An FN official came looking for Marchand’s signature back in 2012. “I told the guy, ‘You’re very nice, but I want to see Marine’.” Four days later, Le Pen telephoned to say she was on her way.

Marchand asked for time to prepare the visit: “We didn’t tell her we were setting up a stage and barbecue.” Close to 400 people turned up. “She was moved to tears,” he recalls. “She promised to come back every year. We thought, we’ll never see her again. No other candidate ever came to see us . . . but she kept her word.”

“Brachay will be the symbol of those villages whose inhabitants feel abandoned by French leaders,” Le Pen promised on an early visit. “They deserve as much attention as the banlieues and troubled neighbourhoods.”

The FN asked Marchand to be a candidate in next June’s legislative elections, but he declined. It’s been 40 years since he left school, and his reading and writing skills are rusty. And besides, he says, he has a farm to manage.

Brachay has endured a seemingly endless streak of hard luck. In the 1950s, the vineyards were wiped out by the phylloxera aphid. In 1974, the closure of the convent-orphanage halved the population to 110. When the owner of the pig farm retired, there was no one to replace him.

A dozen nuns and the priest who said Mass every Sunday departed with the convent. An African priest visits once a year from Saint-Dizier, 38km to the north. “When someone dies, there’s no priest to bury them,” Marchand says. “You understand why people aren’t keen on religion.”

The former convent, two public schools and many of Brachay’s houses are derelict. There is not a single shop, doctor or chemist. The nearest hotel is 40km away. Because of his large size, Marchand must drive 100km to Troyes to buy clothing.

From his upstairs office in the town hall, Marchand gazes at the empty parking lot on the village square. Ducks waddle around the dried-up fountain. A cat runs down a lane. In two hours, a passing tractor is the only sign of life.

Faded Marine Le Pen posters peel from a hoarding where the village’s two cafes once stood. This in a country where the French cafe is practically an institution, an integral part of daily life. “There is not a cafe in the entire canton of 21 villages,” the mayor says sadly.

The Haute-Marne has lost 15 per cent of its population in 45 years. It would seem the perfect place to receive some of the migrants who have fled to Europe. But the area is so neglected that even the Africans and Arabs expelled from the Calais “Jungle” refuse to live here. “They brought them by force to Chaumont, Langres, Saint-Dizier and Vendeuvre,” says Philippe. “They all ran away.”

Marchand calls it “shameful” that “the regional council spent a fortune renovating buildings for [migrants] who don’t want to live here . . . There’s nothing for them to do here. Already, there’s no work for the people who live here. No one will hire them. They don’t even talk French.”

Unlike Marchand, an FN supporter since 1981, Philippe voted socialist and communist in his youth. Fifteen years on construction sites in the Seine-Saint-Denis department north of Paris changed him. “Saint-Denis is not French,” he says. “It’s African and Arab. What we built in the day, the racaille [scum] demolished at night. They stole from the site. They attacked us. Some were only 10 years old.”

Says Marchand: “I’m not a racist, but you ask yourself if you’re in your own country.” Slights stretching back decades meld with more recent incidents. When his daughters were at university in Reims, the mayor says, Arabs told them: “Your France will be ours.”

Marchand says an Arab made a scene in the maternity ward when his wife was giving birth. “They don’t want a male doctor to touch their wives,” Philippe adds. “So let them get medical care somewhere else.”

He reminds me that Sid Ahmed Ghlam, an Algerian immigrant who murdered a French woman in 2015 and attempted a failed church bombing, was from Saint-Dizier.

How would they react if a veiled woman turned up in Brachay? “We wouldn’t kill her,” Philippe says. “But we can’t imagine what she’d do here.”

“Not all Arabs are bad,” Marchand cautions. “There are French scum too.”

The telephone rings; a resident has spotted a car from outside the village, filled with “shifty-looking people, maybe gypsies”.

Households in Brachay have been burgled. “Nobody gets punished,” Marchand complains. “They clamp an electronic bracelet on them and set them free. They stay home all day smoking, and collect the RSA” – the basic welfare payment.

In the Haute-Marne, demographic and agricultural crises have collided. MSA, the farmers’ social insurance organisation, says close to 30 per cent of French farmers cleared less than €354 per month in 2015, substantially less than the €535 RSA allowance for a single person.

Polls show that, for the first time, more farmers will vote for the FN than for Les Républicains, the mainstream right.

“When you go to work in the morning, the scum are still sleeping,” Marchand says. “When you come home at night, you see them enjoying their aperitif in front of the house, and you think, I must be a sucker.”

Philippe’s wife lost her job sewing in a children’s underclothes factory. “The unemployment agency offered her jobs as a roofer or heavy lorry driver – for a 57-year-old woman!” he says with disgust.

“Our discontent is a mix of everything,” the mayor replies. “France tried the right. France tried the left. Nothing ever got better . . . ” He places zero hope in Europe, “that bottomless money pit, where the French are German stooges”.

Brachay votes FN because it longs for order, Marchand says. Polls indicate that Le Pen will lead in the first round on April 23rd, but be defeated in the May 7th run-off. “They’ll all gang up against her,” Philippe predicts.

Marchand dares to believe “Marine” can win. If she does, he says, his first reaction will be enormous satisfaction. “She’ll do what she says, because Marine Le Pen keeps her word.”