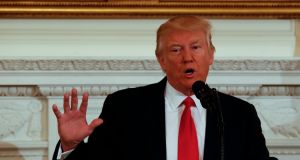 Immigration agents have been “let off the leash” by US president Donald Trump and undocumented migrants may now face deportation if they have committed even a minor infraction while in the country.

Stories of hard cases are beginning to circulate such as that of a woman deported to Mexico 20 years after coming to the US as a teenager for a social security infraction.

Suzanne Lynch reports from Washington on the state of fear that is growing in the migrant community as a result of new rules brought in by Trump.

Also on the podcast, Hugh Linehan examines the content of Facebook founder Mark Zuckerberg’s recent essay on the future of the social media platform as a medium for political and civic engagement, and what it says about Zuckerberg’s political ambitions.

Get World View for free every week by subscribing in iTunes. It can be listened to and downloaded via Soundcloud. Android users can access the podcast via Stitcher.You can also find the latest episodes on The Irish Times app.