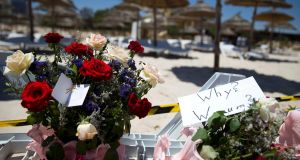 Photograph taken on June 27th, 2015, at the site of the shooting attack on the beach in front of the Riu Imperial Marhaba Hotel in Port el Kantaoui, on the outskirts of Sousse. Photograph: Kenzo Tribouillard/AFP/Getty Images

“Cowardly” Tunisian security forces let down victims of a mass shooting at a beach hotel in 2015, making “deliberate and unjustifiable” delays in their journey to the scene, a UK inquiry found on Tuesday.

The gunman involved killed 30 Britons and eight other nationals, including three Irish people, on the Tunisian beach resort of Sousse, having walked nearly two miles while carrying out the killings before being shot dead by security forces. Islamic State claimed responsibility.

The three Irish people were Lorna Carty from Robinstown, Co Meath, who was in Tunisia on a sun holiday to help her husband recover from a heart attack, and husband and wife Martina and Laurence Hayes, from Westlodge, Athlone.

Summing up after a seven-week inquest, Judge Nicholas Loraine-Smith severely criticised the security forces, saying their response to the attack by jihadist Seifeddine Rezgui had been “at best shambolic, and at worst cowardly”. An inquest by Tunisian authorities was also critical of local security forces’ response.

Judge Loraine-Smith did praise “conspicuous personal courage” showed by some staff and guests, and said neither the tour operator nor the hotel had been neglectful in what the inquest found to have been the unlawful killings of the 30 Britons involved.

The families of some of the British victims are to sue Thomson holidays’ owner, Tui, after the unlawful killing ruling.

After relatives listened tearfully to Judge Loraine-Smith’s summing up, in which he rejected an argument by the families that neglect by the tour operator played a part in the tragedy, a solicitor for 22 of the victims’ families said her clients would launch civil proceedings against Tui, with whom all 30 had booked their trip.

With a group of bereaved relatives standing behind her, Kylie Hutchison, a solicitor at Irwin Mitchell, said: “It is now crucial that the whole travel industry learns from what happened in Sousse to reduce the risk of similar catastrophic incidents in the future.

“On behalf of our clients who lost members of their family, and those who suffered injuries in this terrible incident, we will now be preparing to commence civil proceedings against Tui.”

Speaking outside the court, Tui’s UK managing director, Nick Longman, said the company was “so very sorry” for the “pain and loss those affected have suffered”. He added: “As an industry we have adapted and we will need to continue to do so.”

Hundreds of tourists were sunbathing outside the Imperial Marhaba hotel when Rezgui opened fire with a Kalashnikov assault rifle, killing 38 people in a rampage that lasted about 30 minutes. He was shot dead by Tunisian authorities as he ran from the hotel.

Tui came under significant scrutiny over its handling of Foreign Office travel advice for Tunisia as well as the security at the hotel. During his summing up, the coroner:

* Found Tui did not inform customers where to find the Foreign Office advice in the wake of a prior attack on the Bardo National Museum in the capital of Tunis that killed 22 people.

* Said customers believed they had been reassured by Tui in the wake of the Bardo attack that it was safe to travel to Tunisia, although this was disputed by Tui.

* Praised the families of the victims for “a quiet dignity of which your loved ones would be proud”.

Lawyers representing the families had urged the coroner to rule that neglect played a part in their loved ones’ deaths, alongside a conventional finding of unlawful killing.

But Judge Loraine-Smith told the inquest that legal precedents prevented inquests from applying that conclusion to tourists on holiday, because they were not “dependent” on the travel company or hotel.

Referring to existing precedents, he said: “They very substantially limit the circumstances in which neglect can feature in the conclusions.”

He said he agreed with Tui lawyer Howard Stevens QC that it would be a “quantum leap” in the law to consider the holidaymakers as being “dependent”.

Judge Loraine-Smith added there were a lot of “what ifs” around the case, and better hotel security may simply have meant that more people died on the beach instead.

As the packed courtroom watched in silence, he said the only factor that may have made a material difference was if the hotel had armed guards. But the coroner said: “Having reviewed the legal advice on gun law in Tunisia, it’s clear this was not a realistic option.

“The simple but tragic truth in this case is that a gunman armed with a gun and grenades went to that hotel intending to kill as many tourists as he could.”

The judge said although in general the response of the hotel staff was “disorganised and chaotic”, some of them displayed “conspicuous personal courage” in their efforts to protect the guests. He said guests had displayed the same courage.

But he painted a different picture of the response of police and military, including the guard who took off his shirt to hide the fact he was an officer. He said with the exception of two marine guards, no police entered the hotel grounds until the gunman had killed all 38 tourists.

The judge also referred to a unit that stopped off to pick up more weapons instead of going straight to the scene. “They had everything they required to confront the gunman and could have been at the scene within minutes,” he said, adding: “The delay was deliberate and unjustifiable.”

In a statement issued at the close of the inquest, Andrew Ritchie QC, for the families, acknowledged that the law restricted the coroner’s ability to ascribe blame and said the families had found that structure “both helpful and frustrating”.

In a statement released after the conclusion of the inquest, Mr Longman, who took up post as managing director of Tui UK just weeks before the attack, said: “On behalf of everyone at TUI UK, I would like to again extend our deepest sympathy. We are so very sorry for the pain and loss those affected have suffered.”

He added: “We have now heard the coroner’s findings and his comments regarding the provision of security and visibility of travel advice. These are complex matters and we have already taken steps to raise awareness of the FCO’s Travel Aware campaign. Together with the travel industry, in light of these comments, we must now take some time to further reflect on these areas.”

The coroner said earlier he would take submissions over the next couple of months from the families, Tui and the FCO on recommendations for a preventing future deaths report.

The coroner has powers to produce a report for the government with suggestions for changes in law to prevent future deaths from occurring. Judge Loraine-Smith said he had not decided whether a report was appropriate, but would take submissions.