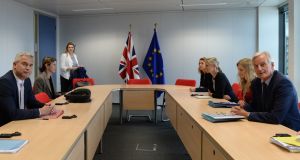 Leaked details of alleged British plans for post-Brexit customs posts at a remove from both sides of the Border and for the monitoring of vehicles travelling between them by GPS have come as little surprise to officials and diplomats here.

They merely reflect in elaborated form in “non-papers” the new thinking of the Johnson government on alternatives to the backstop which have already been widely discussed and dismissed as unacceptable, diplomats say.

A non-paper is a diplomatic means of exploring options while not committing to them – deniability is of the essence.

A British source in Brussels, who promised a formal, legally operable UK proposal for Brussels within 48 hours, said their latest non-paper did not go as far as proposing, as news reports suggested, a series of customs posts away from the Border. However, he acknowledged that many of the elements that it did contain, such as reliance on trusted trader schemes and GPS surveillance, have been raised by London before.

British prime minister Boris Johnson told the BBC on Tuesday “that’s not what we are proposing at all...Absolutely not. There are good reasons why that would not be a good idea both for practical reasons and reasons of sentiment that we understand.”

The prime minister said “they’re not talking about the proposals that we’re actually going to be making, they’re talking about some stuff that went in previous papers”.

However, reports from London suggest that the rationale for the non-papers is still at the heart of the impending British proposal.

Although the British non-papers have not been circulated to member state embassies, at London’s request, their thrust had been discussed with ambassadors by chief negotiator Michel Barnier, who has been reported as deploring the Johnson retreat from a commitment to no Border controls.

He told journalists in Germany last week that “the new government of the UK wants us to get rid of this solution, the so-called backstop and wants... a regulatory and customs land border on the island of Ireland”.

“The UK government also wants the EU to change the way the internal market and border control operates after Brexit.”

The European Commission’s position remains that any new “legally operable” proposals from London, if they are to be the basis of negotiations, must meet the three tests: of safeguarding the Belfast Agreement in all its aspects – both cross-Border co-operation and a soft Border; of protecting the single market; and of not damaging the all-Ireland economy, notably through customs checks, whether at or away from the Border.

The UK now disputes that it is possible to meet the latter condition which it says is inevitable in the context of its break from the EU economy, and its objection to the requirement, it says, stems from a desire to forge free trade agreements with the world unencumbered by EU controls.

It sees its Border obligations, Irish sources complain, simply in terms of a no-hard-infrastructure-on-the-Border commitment.

The British proposals are also expected to include a willingness to embrace an all-Ireland SPS (animal-food) regulatory regime that could simplify Border control issues. EU SPS regulations require checks “at the point of entry”, ie on the Border, in order to prevent diseased animals/food from entering the EU.

Such “point of entry” SPS controls would not be necessary in an all-Ireland SPS region, although customs controls would still be necessary, possibly away from the Border, unless the North remained part of a customs union. The monitoring of trade flows, not least for the purpose of levying duties, is an essential customs function.

There is no confidence in Brussels that when the new British proposal arrives it will come anywhere near reconciling positions that remain so far apart.