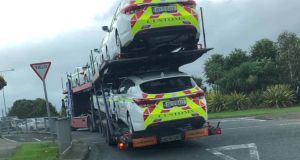 A campaign group representing communities along the Border opposed to Brexit have reacted with concern at the arrival of a fleet of new Revenue customs cars in Dundalk, Co Louth.

The publication of the images online triggered alarm among Border residents and criticism of the Government’s response to Brexit on social media.

The group called on the Government to be more open with communities along the Border about how it intends to manage the new EU border should the UK exit at the end of this month without a deal.

“This is another example of how the Irish Government are preparing for Brexit,” said a spokesman for the group, referring to the photographs that were posted on its Facebook page on Tuesday afternoon.

“Border communities need to be told now in clear and uncertain terms what the Border will look like following a no deal,” he said.

“It’s certain that the Irish Government will be bound to follow EU rules pertaining to managing a Border with a third country,” he said, referring to the UK’s post-Brexit status.

“The Taoiseach cannot allow communities to be left behind,” he added, warning that the 1998 Belfast Agreement and the Northern Ireland peace process were “under attack by Brexit.”

The Revenue said it was acquiring 16 new vehicles for its customs fleet, some to replace older vehicle and that the overall size of the fleet would increase to 242 from 229 at the start of last month.

“These vehicles will be distributed at various locations nationwide based on operational requirements,” said the spokeswoman, who sidestepped a question on whether the additional vehicles in Dundalk were required to deal with changes as a result of Brexit.

Images of the new cars arriving in Revenue appeared amid heightened concern about the uncertain future of the Border following Brexit after British prime minister Boris Johnson publicly distanced himself from reports that he was proposing new customs clearance centres on either side of the Border.

Seamus Leheny, policy manager of the Freight Transport Association Northern Ireland, responded to the photos on social media, saying that the “reality of Border checks” were “getting real now.”

The Government has said that there would have to be checks on goods crossing the Border in the event of a no-deal Brexit but has also said it is still in discussion with the EU on where those checks would take place.

The Revenue has hired more than 450 people, including some 370 this year, to prepare for Brexit, as part of a phased recruitment of an additional 600 people to deal with the extra work resulting from the UK’s exit.

Minister for Finance Paschal Donohoe provided Revenue with an additional €10 million in last year’s budget for the recruitment of the staff. The uncertainty around the manner and timing of the UK’s departure from the EU and the possibility of a disorderly exit resulted in Revenue accelerating its recruitment plan.