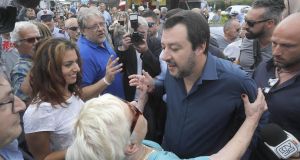 Italy’s president has attempted to broker an eleventh-hour deal between the country’s two largest populist parties to avoid another destabilising national election, helping Italian assets recover from a sell-off that rattled investors worldwide.

Sergio Mattarella, who triggered this week’s crisis by blocking the appointment of a Eurosceptic finance minister proposed by the two parties last Sunday, held informal meetings with leaders of the anti-establishment Five Star Movement and the far-right League on Wednesday evening.

Although Mr Mattarella was unable to reach agreement to form a new coalition, he gave both parties more time to reach a deal, prompting Carlo Cottarelli, the former IMF official who had been tasked with forming an interim technocratic government on Monday, to put his own plans on hold.

The rekindling of coalition talks triggered a rally in Italian bonds and stocks. The yield on the politically sensitive two-year note tumbled about 1.15 percentage points to 1.49 per cent as prices rose. Milan’s FTSE MIB stock market index closed up 2.1 per cent.

Investors have been unsettled by the prospect of snap elections, which will be seen as a referendum on Italy’s membership in the euro - a tacit acknowledgment that a currency union once described as inviolable may, in fact, be voluntary.

Mr Cottarelli’s stopgap government was not expected to win a parliamentary vote of confidence, trigging elections as early as July.

But after two meetings on Wednesday, Mr Cottarelli and Mr Mattarella agreed to a delay to see if the talks between Five Star and the League might come to fruition, according to one senior official close to the discussions.

Matteo Salvini, the 45-year-old head of the League, has seen his support grow in recent opinion polling, and told campaign rallies in Tuscany and Liguria that he wanted to quickly go to another election.

“We have consistency and loyalty,” he said. “We were ready to go last week and they didn’t allow us.”

Luigi Di Maio, the Five Star leader whose party finished ahead in the election in March, has led efforts to resurrect the coalition, saying on Wednesday night that Paolo Savona, the 81-year-old Eurosceptic proposed for the finance ministry, could be moved to another job.

“There are two paths ahead: either we launch the [coalition] government with a reasonable solution or we vote right away,” Mr Di Maio said.

An aide to the Italian president said the offer to shift Mr Savona to a different ministry was being “evaluated with great attention”.

The choice of finance minister remains the biggest sticking point in talks between the two parties. If no deal is reached, Italy would be heading towards a new election. While Five Star wants parliament to be dissolved immediately, triggering a summer vote, the League is pushing for a poll in the autumn.

The renewed hope of a peaceful end to the political infighting helped Rome sell €5.6 billion of fresh debt at auction on Wednesday morning, though at a higher borrowing cost than at its previous similar sale. It paid a 2.32 per cent yield for five-year debt, and 3 per cent for 10-year paper.

A rush to buy US Treasuries as an investment haven amid the turmoil eased. The yield on the 10-year US Treasuries was up just 7bp to 2.85 per cent by early afternoon in New York on Wednesday.

On currency markets, the euro rallied on reduced Italian fears, rising more than 1 per cent to nearly $1.17 on Wednesday. – Copyright The Financial Times Limited 2018