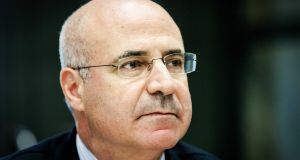 Russia’s campaign to extradite Vladimir Putin’s arch foe Bill Browder suffered a setback on Wednesday after police in Spain first detained the US-born financier and then released him.

Mr Browder, who was in Madrid to testify to Spanish prosecutors about a corruption case allegedly involving Russian officials, tweeted from a police car early on Wednesday that he had been arrested under a Russian Interpol warrant.

However, Spanish police released him from custody after one hour, saying the Interpol warrant was no longer valid.

Mr Browder, whose Hermitage Capital Management Fund was once one of the biggest portfolio investors in Russia, has become a fierce critic of the Kremlin since being barred from entering the country in 2005.

He has campaigned internationally for sanctions – including visa bans and asset freezes – against Russian officials accused of corruption and human rights abuses.

The sanctions are named after the late Sergei Magnitsky, a Hermitage Capital lawyer, who uncovered evidence that Russian officials were involved in a complex fraud and tax evasion scheme using assets stolen from the hedge fund. When Mr Magnitsky sued the Russian state for the alleged fraud in 2008 he was arrested and held in a Moscow jail where he developed a severe illness. He died the following year after his jailers denied him urgently needed medical treatment.

Russia has denied involvement in the Hermitage Capital fraud and instead accused Mr Browder and Mr Magnitsky of creating a firm for tax evasion purposes..

A Moscow court found Mr Browder guilty in absentia of fraud and tax evasion in 2013 at the same trial where the deceased Mr Magnitsky faced charges and sentenced him to nine years in jail. His lawyers have appealed against the verdict saying the case was politically motivated.

Moscow has repeatedly tried to use Interpol to arrest Mr Browder and extradite him to Russia to face jail. His name was placed on an Interpol wanted list last year at Russia’s behest in 2013, but swiftly removed after being deemed “predominantly political in nature” by the the international criminal police organisation.

Mr Browder was in Madrid on Wednesday to give evidence to Spanish prosecutors about money from the Magnitsky case allegedly funneled to Spain by corrupt Russian officials.

However, Mr Browder indicated that Russia had issued a new arrest warrant against him.

“Spanish national police just released me after Interpol general secretary in Lyon advised them not to honour the new Russian Interpol red notice,” he tweeted on Wednesday. “This is the sixth time that Russia has abused Interpol in my case.”

Mr Browder, who was born in the US but is now a British citizen, left Spain on Wednesday for Britain. British foreign secretary Boris Johnson welcomed his release. “Moscow should concentrate on bringing those responsible for the murder of Magnitsky to justice,” he tweeted.