Malian who scaled building to rescue child will get French citizenship

Mamoudou Gassama, a 22-year-old Malian migrant, has been praised by French authorities after footage of him scaling four storeys to rescue a child dangling from a balcony went viral around the world. 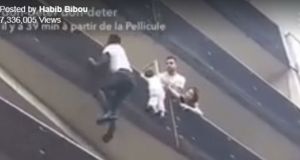 Paris mayor Anne Hidalgo said: “His heroic gesture was an example for all citizens.” 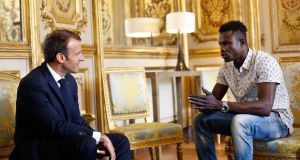 Until last weekend, Mamoudou Gassama was just one of the thousands of illegal migrants in northeast Paris. On Monday, the 22-year-old Malian was at the Élysée Palace to meet President Emmanuel Macron, who gave him a medal and promised him French nationality.

This was after a video of Gassama scaling the façade of a Paris apartment building with his bare hands to save a four-year old child had gone viral and been watched by millions of people around the world.

The muscular, agile African, dubbed “Spiderman” by French and foreign media, is now a hero. “I was with my girlfriend. We were going to watch a match when I heard people screaming and hooting horns,” Gassama told journalists from Le Parisien and Le Figaro newspapers. “I came outside and I saw the child was going to fall. I crossed the road and I went up there. And thank God, I saved him.”

Gassama said he did not think of the danger. “I like children a lot and I didn’t want to see anything happen to him. I just wanted to save him. That gave me courage.”

The crowd that gathered on the pavement below the building on the rue Marx-Dormoy pulled together in hope of catching the child if he fell. Someone called the police, but no one else tried to climb up.

Gassama raced up the facade in seconds, pulling himself up on to each successive balcony. When he reached the fourth floor, he grabbed the child and hoisted him over the balustrade to safety. He found the sliding glass door to the apartment locked. The boy’s father has been arrested for leaving the child unattended, and the child is now in the custody of social services.

In amateur videos, a neighbour on the adjacent balcony appears to be within reach of the child. “In fact, they are two different balconies, with a partition and a space between them. The neighbour couldn’t lean over to save the child,” a witness called Samy told Le Parisien.

Gassama wore faded blue jeans and a snug, white, short-sleeved shirt as he sat on a satin brocade armchair in the Élysée, opposite Macron, on Monday morning. “How was the child?” Macron asked. “He was crying,” Gassama replied. “Bravo,” Macron said.

Macron told Gassama that “in gratitude for this heroic act”, he would receive residence papers, and that the Paris fire department would like to hire him. “I also invited him to apply for naturalisation, because France is about will power, and Monsieur Gassama has shown he has that!” Macron tweeted.

Gassama arrived from Mali, after crossing the Mediterranean on a boat, last September.

Paris mayor Anne Hidalgo also praised the Malian. “I told him that his heroic gesture is an example for all citizens, and that the city of Paris obviously wants to support his efforts to settle in France,” she said after speaking to him on the telephone.

Thousands of people signed an online petition demanding that Gassama be given French nationality. Another Malian, Lassana Bathily (27), was naturalised after he saved several people in an attack on a kosher supermarket in 2015.