Ukraine says it faked Arkady Babchenko’s death to try to intercept Russian-backed plot to kill him. 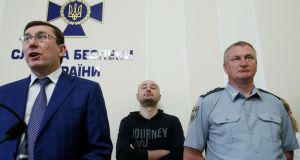 Ukraine’s SBU security service has said that it faked the bloody murder of dissident journalist Arkady Babchenko to foil an alleged Russian plot to kill him and other critics of the Kremlin.

Mr Babchenko appeared at a press conference in Kiev on Wednesday that had been called by the SBU to reveal details of his supposed death the previous night, when he was reportedly shot dead at his apartment in the city.

“I’m sorry, but there was no other way of doing it. Separately, I want to apologise to my wife for the hell that she has been through,” said the reporter, who moved to Kiev last year after his criticism of Russia’s authorities prompted death threats.

Mr Babchenko (41) said he had worked with SBU agents to prepare the sting operation since they had told him that his life was in danger last month.

“They said a contract is out on you. The money had already been handed over. As far as I know, $40,000... They showed me documents, my passport details and a photograph that is only in my passport... Only the [Russian] special services could get this information,” he said.

SBU chief Vasyl Hrytsak said his agents had arrested a Ukrainian citizen – identified only as “G” – who allegedly received $10,000 from Russia to organise the murder of Mr Babchenko and passed on $30,000 to an unnamed gunman.

Mr Hrytsak said the would-be assassin was a former fighter in Ukraine’s four-year war with Russian-led separatists in the eastern Donbas region, which is the epicentre of a multi-faceted “hybrid” war between Kiev and Moscow.

Ukrainian prosecutor general Yuriy Lutsenko said the gunman had been caught at an earlier stage by the SBU and incorporated into the sting, pretending to shoot Mr Babchenko to help agents close the net on the alleged organiser, “G”.

“We have many times unmasked Russian spies and terrorists while they were directly and indirectly organising terrorist acts and murders in Ukraine, ” Mr Lutsenko said. “I think today you can say that, if before ‘all roads led to Rome’, today all roads of war and terrorist acts lead to Moscow.”

Ukraine’s president Petro Poroshenko – who has been criticised along with Mr Lutsenko and the SBU over several high-profile murders in Ukraine that have not been solved – hailed his security services and ordered round-the-clock protection for Mr Babchenko and his family.

Anton Gerashchenko, a Ukrainian deputy and interior ministry adviser, said that “a very limited number of people knew that the murder ... was actually staged”.

“To get better evidence against those who ordered and organised the crime – representatives of the Russian special services – it was necessary to convince them that the killer they hired had successfully carried out their order,” he added. “Even ... Sherlock Holmes successfully used the method of faking his own death to effectively investigate complicated and intricate crimes. No matter how painful it was for his relatives and friends.”

Before Mr Babchenko was presented alive and well, several senior Russian officials flatly rejected their country’s alleged involvement in the killing. “That Babchenko is alive is the best news. Let it always be like that,” Russian foreign ministry spokeswoman Maria Zakharova said later in the day.

“It’s sad that in other cases [in Ukraine] the masquerade didn’t work out. It’s obvious there was a propaganda effect in this story.”

Media watchdogs – and some of Mr Babchenko’s angry and upset colleagues – also condemned the sting operation.

Reporters Without Borders expressed its “deepest indignation after discovering the manipulation of the Ukrainian secret services, this new step of a war of information”.