Hiding in Howth: When the 1968 revolution came to Ireland

Rudi Dutschke led the student revolt in West Germany, but after an assassination attempt, he and his wife Gretchen found solace in the north Dublin home of Conor Cruise O’Brien 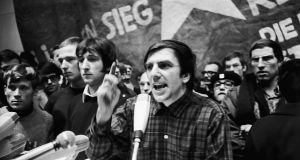 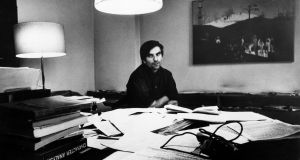 On a stormy morning in mid-January 1969, a young couple stepped off the ferry in Dún Laoghaire harbour at dawn. Waiting to whisk them to his home on Howth Head, in north Co Dublin, was Conor Cruise O’Brien.

For the next two months one of Ireland’s most notorious public figures now had an even more controversial house guest: Rudi Dutschke, the outspoken leader of West Germany’s student revolt of 1968.

But when he arrived in Ireland Dutschke, with little money and only basic English, was effectively a man on the run. Nine months previously his revolutionary career – and almost his life – had been cut short with three shots in broad daylight on Berlin’s Kurfürstendamm.

By a miracle Dutschke survived the attack – two shots to his head and one to his shoulder – but with brain damage, speech difficulties, blindness in one eye, memory loss as well as epilepsy and panic attacks.

His journey from near-death in West Berlin to refuge on the hill of Howth is one of the lesser-known chapters of the revolt. Now his widow Gretchen is returning to Ireland for the first time since then.

“Rudi had to regain his health and he needed peace and quiet,” she says in her Berlin home. “He definitely wanted to go back to politics, doing what he did before, but we knew it would be a long process.”

Rudi Dutschke was born in Schönefeld, southeast of Berlin, in 1940. He fled what would become East Germany in 1961, three days before the Berlin Wall was built, and began studying at the city’s Free University.

There he co-founded a branch of Subversive Action, a group that grew out of the Frankfurt School of Theodor Adorno and Max Horkheimer. This group viewed modern western societies as inherently repressive, controlling people no longer through police or the law but by the more subtle temptations of consumption. Western capitalist society needed a thorough overhaul, they argued, but first people needed to free their inner, repressed desires.

This was heady stuff, debated by West Berlin students in the smoky cafe on Steinplatz. It was here, in June 1964, that Rudi Dutschke met his future wife: Gretchen Klotz from Illinois, then 22, and just arrived in Berlin.

“I grew up in the McCarthy era and we were taught to be terrified of the communists, so going to Berlin was an adventure to see if this was really the case,” she says. They fell into conversation but what she remembers most were his intense brown eyes and shapely legs in lederhosen.

After going to see a John Wayne western with his friends, the two – with some encouragement from the others – went home together to his student digs. They spent an idyllic summer together before Rudi announced he couldn’t get involved with her, or anyone who would get in the way of his revolution.

“I cried a lot; it was just so sad,” she recalls today. But he must have thought it was a mistake to send me away because a few months later he said to come back, and I did in 1965.”

They married a year later, eventually had three children, and were inseparable from then on.

“In public he made these impassioned speeches but at home he was just a husband and father and really loved to play with the kids,” she said.

For Dutschke, from a pious Lutheran household, post-war Germany was still in thrall to pre-war totalitarian structures. He studied closely the writings of Marx and Gramsci, was critical of market capitalism and led protests against the Bonn government and the Vietnam war, and showed solidarity with developing countries.

In the emotive, intellectual and divisive world of student politics, Dutschke was a stand-out orator who attracted the jealousy of some peers and outright hostility of the conservative West German establishment. Its draconian crackdown on growing student unrest in the late 1960s suggested to Dutschke and his peers an unbroken authoritarian streak in a German society still in denial about widespread collaboration in the Nazi era.

Fears of West Germany backsliding to the bad old days grew – as did Rudi Dutschke’s reputation – after the fatal shooting of a student, Benno Ohnesorg, during a 1967 visit of the Iranian Shah to West Berlin. Dutschke’s fiery rhetorical style and anti-American, anti-imperialist positions polarised the German public, bringing him fame and infamy in equal measure – and, on April 11th, 1968, three bullets at close range.

A half century on, Gretchen Dutschke still remembers the phone ringing and an anonymous caller saying her husband was dead. She disregarded the call as a crank but after a second, with Dutschke still not back from collecting a prescription for their sick son, their friend Gaston Salvatore called the police.

“When the police also said he was dead I started screaming,” she says.

Eventually they found out Dutschke wasn’t dead but in a critical condition and rushed to his bedside.

“I remember being in the hospital and waiting for a long time,” she says. Outside, thousands of students joined a spontaneous march to the tower of the conservative Springer newspaper group in West Berlin. A riot broke out, with students blaming the Bild tabloid’s regular attacks on the “gang leader” Dutschke as inciting the far-right gunman Josef Bachmann. Over two dozen protest marches followed across the country, but Gretchen Dutschke had only one thing on her mind: her brain-damaged husband fighting for his life.

He made a remarkable recovery but had to learn to speak and write again, and fill the many gaps in his memory. But the angry, eloquent young man had been replaced by a depressed figure who missed the revolutionary fray, was prone to panic attacks and was hugely dependent on her.

“You have two options in a situation like this: either you can stay or you can go and I didn’t have any desire to go,” she says. “I was in love with him and he was someone I cared for deeply.”

They escaped to Italy for Rudi to recover but, when the press found them, moved on to Cambridge. Hopes for a long-term visa, to allow Dutschke to convalesce and write his doctorate, were blocked by the Tory government.

Their journalist friend Neal Ascherson made inquires, booked them passage on a ferry under the name “Drucker” and they found themselves pulling into Dún Laoghaire.

“There was Conor waiting on the quay with the rain blasting his coat around his legs,” recalls Ascherson today. “He drove us through Dublin and we got to their house at Howth around dawn, bewildered and tired, in a warm Irish kitchen with Máire [Mhac An tSaoi] making tea for us.”

Gretchen remembers, too, the warm welcome and long discussions between her husband and their host: Dutschke’s revolution, O’Brien’s wild UN Congo days.

She laughs at another memory: Máire making an Irish stew in a big pot and continually adding to it on subsequent days.

“I don’t know how many years it had been there, and it tasted fine, but I found it amazing you had one big pot and kept adding to it,” she recalls.

There were German visitors during their Howth stay, such as Dutschke’s lawyer Horst Mahler who urged the Dutschkes – to no avail – to join him underground in the radical movement that would become the Red Army Faction terror group.

Looking on from Howth as the student movement back home splintered and radicalised, the Dutschkes considered staying in Ireland but returned to the UK in mid-March when another visa came through. They were expelled in 1971 as “undesirable aliens” and settled in Denmark.

On Christmas Eve 1979, not yet 40, Rudi Dutschke died after an epileptic episode in the bath.

Almost four decades on, Rudi Dutschke remains one of modern Germany’s most fascinating and complex figures, his name still the quickest way to start a fiery dinner-table discussion.

What shocked me was, when the women talked in meetings, the men laughed. I said to Rudi ‘this is impossible’ but I don’t think he was aware of it

But as his homeland debates the legacy of the 1968 student revolution and its immortal young figurehead, it’s worth recalling Gretchen Dutschke’s own crucial role.

Before supporting her husband after the shooting, and raising their three children after his death, she pulled him up on the misogyny in their revolutionary ranks – unchanged from attitudes of the old guard the students so detested.

“What shocked me was, when the women talked in meetings, the men laughed,” said Gretchen Dutschke. “I said to Rudi ‘this is impossible’ but I don’t think he was aware of it up to that point, he couldn’t see it before then.”

Eventually the women revolted against their chauvinist colleagues, their outsized egos and unreflected sexism – and Germany’s women’s movement was born.

Half a century on, Gretchen Dutschke argues in her new book that the anti-authoritarian revolution she shaped with her husband inoculated her adoptive home of Germany against the right-wing extremism and nationalist populism infecting many neighbours.

“I think Germany has held out pretty well so far against the extreme right-wing,” she said. “And that has to do with the democratisation process and culture revolution which the 68ers carried out. It’s still having an effect.”

Gretchen Dutschke will speak at Ormston House in Limerick on Saturday May 26th at 9am, organised by UL’s Centre for German Studies, and at the German ambassador’s residence on Monday May 28th at 6pm. Her book Worauf wir stolz sein dürfen (“What we can be proud of”) is published in German by Kursbuch Kulturstiftung

1 RTÉ receives complaint from union after ‘issue’ with spokeswoman’s accent
2 Clontarf tenant says her garden was ‘destroyed’ without warning by Irish Rail
3 Fianna Fáil election candidate was disqualified from being company director
4 How to get through the health insurance maze
5 Election 2020: Fine Gael and Fianna Fáil set to reveal spending plans worth billions
Real news has value SUBSCRIBE