Doctors carrying out tests on body of Imane Fadil, who attended Berlusconi parties 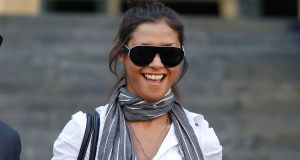 Imane Fadil leaving a court in Milan in 2011. She had repeatedly told friends and relatives she was scared someone wanted to kill her. Photograph: Luca Bruno/AP

Results from the first tests on the body of Imane Fadil, a Moroccan model who was a regular guest at Silvio Berlusconi’s “bunga bunga” parties, have excluded radioactive poisoning as a cause of death, doctors announced on Friday.

Last week Italian magistrates opened an investigation into the possible murder of Fadil (33), who testified in 2012 against the former prime minister Silvio Berlusconi, who was accused at the time of paying for sex with an underage girl during organised sex parties at his villa.

Fadil died on March 1st, a month after being admitted to a hospital in Milan with severe stomach pains. A few days before, she told friends and her lawyer she had been poisoned.

Magistrates in Milan, who are investigating Mr Berlusconi’s “bunga bunga” parties, ordered an autopsy and for her medical records to be seized.

The postmortem has not yet been carried out, but the first tests on the woman’s internal organs appeared to exclude the presence of radioactive substances, initially given as a possible cause of death, said doctors in Milan.

Fadil had repeatedly told friends and relatives she was scared someone wanted to kill her.

“I’m still paying dearly for my testimony at the trial against Berlusconi,” Fadil said in an interview with the newspaper la Repubblica a few days before being admitted to hospital.

The results of previous blood tests showed the presence of metals such as cobalt and chromium, though it was not clear if the substances were radioactive and potentially lethal.

The results of the latest tests appeared to exclude the possibility of radioactive poisoning. Doctors have speculated Fadil might have been poisoned with other chemicals or that she died from a rare disease the medical staff were unable to diagnose.

Speaking on Saturday, Mr Berlusconi said: “It’s always a pity when a young person dies. I never met this person, never talked to her.’’

In 2012 Fadil told the court that one of the parties at the former prime minister’s home involved young women wearing nuns’ costumes and stripping off while performing pole dances.

“They started to dance like the nuns in the film Sister Act, and then they took off their clothes,” she said. At another party, a woman in her underwear stripped for Berlusconi wearing a mask with the face of the footballer Ronaldinho, she said.

Mr Berlusconi was initially convicted in the case but ultimately acquitted after a judge ruled he could not have known the girl was a minor.

However, magistrates subsequently laid new charges against Mr Berlusconi and other defendants, accusing them of bribing some of the women who attended the parties to keep them from telling the truth at the initial trial.

Last Tuesday, during the latest hearing of the ongoing trial in Milan, Mr Berlusconi’s lawyer said in the courtroom “that the death of Imane harmed the defence of the former prime minister”.

Italian newspapers reported that Fadil was writing a book about her experiences and magistrates had obtained a copy of the manuscript after her death. – Guardian