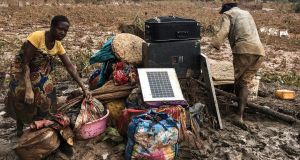 Mozambique, which was hit by Cyclone Idai over the weekend, is trying to rescue people from vast and deadly flooding. It has declared a state of emergency and is appealing for international help.

The South African air force and the Indian navy have arrived in the devastated port city of Beira and are supporting the Mozambican national institute of disaster management (INGC) with search and rescue missions. Boats and helicopters are rescuing stranded people but there are thought to be too few to cope with the number in trees and on roofs.

With heavy rains still falling in the region, floodwaters are predicted to rise in the coming days, meaning more people will die and need to be rescued. Mozambique’s president, Filipe Nyusi, warned there could be waves of up to 8m high.

The scale of the disaster is so enormous that the southeast African country and the INGC, which has considerable experience and expertise, cannot cope alone. Humanitarian organisations are deploying to Beira, but because large areas are underwater and cut off, with communications down for a fifth day, no power and the main road washed away, getting supplies and staff in and information out is extremely difficult. The airport was badly damaged but is working again and some commercial flights are running from the capital, Maputo.

Aerial images released by the INGC showed survivors packed together on top of high buildings in Buzi district, which is thought to have been affected more badly than Beira. The town of Buzi, home to 200,000 people, is at risk of being partially submerged as rain continues to fall.

There is a limited window in which survivors will be able to stay alive, given that most have no access to food and clean water. “It is longer than in an earthquake,” said Jens Laerke of the UN aid agency OCHA. “People will be able to survive longer.”

The international search and rescue advisory group has been alerted, but most of its members have more experience with earthquakes than floods.

Mozambique’s death toll was officially 202 on Wednesday, after more than doubling overnight – but this represents the bodies that officials have been able to count, and the real, far higher toll is unlikely to be known for a long time. Many have died and many others in neighbouring Malawi and Zimbabwe are in need of aid too.

The South African air force had five rescue helicopters in Beira on Tuesday; the UN’s food agency, the World Food Programme, had one or two, which were delivering emergency biscuits.

The port was only partially damaged so some boats are able to get in and out; the number working to rescue people is unknown, but it is difficult, dangerous work.

The immediate need is to rescue stranded people, though access to food, shelter, clean water and health provision are other high priorities. The centres to which rescued people are being taken in Beira are basic.

More than 400sq km in the region are flooded, according to satellite images taken by the EU, and in some places the water is 6m deep.

At least 600,000 people are affected, according to the OCHA, ranging from those whose lives are in immediate danger to those who need other kinds of aid.

On Friday, the UN estimated that Mozambique would need $40.8 million (€35.9 million) for the initial life-saving operation, but this was before the scale of the disaster was known and the figure is now thought to be much higher.

The UN is appealing to donors for this money, which the three affected countries – some of the poorest in the world – cannot afford. About $20 million has been released from a central emergency response fund, $15 million of which will go to Mozambique.

The country began three days of mourning on Wednesday. “We are in an extremely difficult situation,” said Nyusi. – Guardian