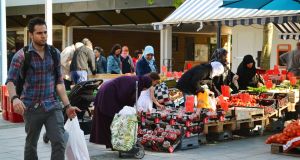 Rinkeby suburb of Stockholm: 90 per cent of people living there are foreign-born. There is a jobless rate three times the Stockholm average. Photograph: Kyodo News via Getty Images

Polish-born pensioner Agata sits in the sunny open square of the Rinkeby shopping centre, on the outskirts of Stockholm, and laughs when she hears Donald Trump’s name.

Last year the US president warned of a surge in violence in Sweden after a US television report about neighbourhoods like Rinkeby, and the supposed cover-up of immigrant criminality there.

Before Agata moved to Rinkeby 20 years ago she lived in Trump’s home town – New York City – where she learned a thing or two about gang crime that even Rinkeby cannot match.

“It is mostly nice and quiet and clean here, the black people are polite and friendly, but outsiders are only interested when bad things happen,” she says, sitting beside an open-air fruit and vegetable market.

Leaving the Rinkeby underground station is like crossing continents with public transport. Shiny, white, downtown Stockholm is just 18 minutes away but here the streets are populated by Iraqis and Somalians, many in headscarves and even a handful of women in niqabs.

Some 90 per cent of people living here are foreign-born and crowds of working-age men sit around in cafes, testament to failed integration and a jobless rate three times the Stockholm average.

When night falls, another Rinkeby emerges, populated by gangs of young men who hang around and zip around on scooters as the occasional police helicopter watches from above.

Half a century after it was planned, Rinkeby – and similar immigrant suburbs in Gothenburg and Malmo – have become a contested symbol in Sweden’s closely watched general election on Sunday.

Most of the heated campaign has been dominated by immigration and integration issues – with the far-right Sweden Democrats (SD) calling the tune.

Its election videos show tower-block neighbourhoods like Rinkeby in drab grey, overlaid with ominous music and slow-motion footage of riots and burning cars.

What are officially referred to as “vulnerable areas” are “no-go zones” for most Swedes, who know these places only from crime reports. There have been riots every other year in Rinkeby and fatal shootings are no longer a rarity. Swedish national statistics show 41 fatal shootings last year – more than double the 2011 number.

In the SD narrative, this is a direct result of unchecked immigration that “ruined Sweden” and brought in 160,000 people – proportionately more than any other European country.

On the defensive, Sweden’s Social Democrat-led government has since tighted up migration laws. But locals in Rinkeby say the real problem is not about new immigration but old, failed integration policies of state alimentation and benevolent apathy.

Talk to Ahmed Abdirahman about the neighbourhood he has called home for 20 years, after moving here from Somalia as an 11 year old with his family, and the word he keeps using is segregation.

He grew up in Tensta, next to Rinkeby, and is an integration expert at the Stockholm Chamber of Commerce.

His mother pushed education and the Swedish language and her son displays an eloquent determination to assist those who were less fortunate by lobbying Sweden’s politicians.

A new integration effort is needed, he says, from a language-learning push to an opening of native Swedes’ networks to jobseekers with immigrant roots.

Abdirahman sees the rise of the populist SD and its xenophobic rhetoric as a serious risk, but also a chance to create a more inclusive Swedish “togetherness” model for this century.

“Until now people were afraid to discuss problems with migrants before for fear of being labelled racists,” he said. The challenge now is to balance overdue law-and-order measures against immigrants who commit crime without overshooting the target because of social media distortions and half-truths from incomplete statistics.

“Most people believe immigrants take out of the system yet, as soon they take a job, putting back into the system as millions of foreign born citizens do here, they are no longer registered anywhere as such,” he said.

Back in Rinkeby main square, local Social Democrat candidate Mohammed Nuur, of Somali descent, is promising his neighbours “early-age [crime] prevention is an investment in the future”.

From behind a shop window sign, reading “Politicians must be begin to act”, a Swedish-Egyptian sales assistant says her work colleagues are Palestinian and Iranian.

“Things are rougher here than 20 years ago,” she said, “but we are all Swedes and not giving up our neighbourhood – if we get help.”