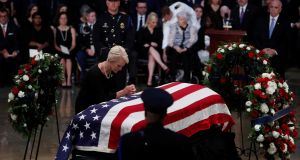 Cindy McCain, wife of late US senator John McCain, leans over his casket as his body lies in state inside the US Capitol rotunda in Washington on Friday. Photograph: Eric Thayer/Reuters

John McCain was an emblem of America’s “fighting spirit, noble idealism and solemn patriotism”, Senate majority leader Mitch McConnell said on Friday as he led tributes to the veteran senator at a service in the US Capitol.

The body of Mr McCain was brought to the home of both Houses of Congress shortly after 10am on Friday, lying in state throughout the day. The 81-year-old Vietnam veteran, who represented Arizona in Congress for 35 years, died last Saturday after losing a battle with brain cancer.

He was elected to the Senate in 1987, having already represented the state of Arizona for two terms in the House of Representatives. His political career followed many years in the US navy, including a 5½-year spell as a prisoner of war in Vietnam. His father and grandfather had also been navy admirals.

Vice-president Mike Pence was the most senior member of the Trump administration to attend the ceremony. President Donald Trump was not in attendance. The Republican president clashed with Mr McCain frequently after securing the Republican nominee for president in 2016, with the veteran senator openly criticising the president on several occasions.

Opening his speech, Mr Pence said the president had asked him to attend “on behalf of a grateful nation – to pay a debt of honour and respect to a man who served his country throughout his life”.

Mr Pence, who served alongside Mr McCain as a member of Congress for more than a decade, praised the deceased senator’s “iron will”, describing him as a “patriot”. “In my years in Congress and as vice-president, we didn’t always agree,” he said. “But his support for limited government, for tax reform, and support for our armed forces surely made our nation more prosperous and more secure, and he will be missed.”

But it was Mr McCain’s colleagues in Congress who spoke most passionately about the man who was a giant of US politics. “Today, our nation bows in grief,” said House speaker Paul Ryan, describing Mr McCain as “one of the bravest souls our nation has ever produced”.

“Though the highest office eluded him, he attained what is far more enduring: the abiding affection of his fellow citizens and an example for future generations,” he said, referring to Mr McCain’s two attempts to contest the presidential election.

Both President Barack Obama and President George W Bush will speak at Saturday’s funeral service for Mr McCain at Washington National Cathedral at the request of the late senator.