‘I am not afraid’: Barcelona vigil sends out defiant message 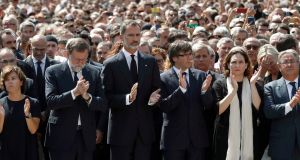 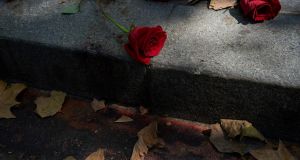 The shouts of “No tinc por!” (I am not afraid) rang out across Barcelona’s Plaça de Catalunya, repeated rhythmically by the thousands who gathered in the hot sun to pay respects to the dead and injured after Thursday’s terrorist attack.

Red roses were held aloft during a minute’s silence that was broken only by the distant wail of a siren - a reminder that at least one of the perpetrators is still at large.

King Felipe VI and the prime minister, Mariano Rajoy, joined residents and visitors for the vigil. The Catalan president, the mayor of Barcelona and other leading political figures were also in attendance.

“Unfortunately, Spaniards know the absurd and irrational pain that terrorism causes,” Mr Rajoy said as he declared three days of mourning. “We have received blows like this in recent years, but we also know that terrorists can be beaten.”

Afterwards, the crowds descended down Las Ramblas, the wide boulevard that runs south from Plaça de Catalunya, in an act of reclamation. The day before, 13 people had died when a terrorist ploughed a van into pedestrians in the bustling tourist hotspot.

The crowds passed a makeshift shrine to the dead and injured at the Canaletes fountain near the northern end of Las Ramblas, where Barcelona football fans traditionally gather to celebrate victories.

The mood across the city was one of shock, anger and defiance. In public and in private, people insisted life must go on as normal.

“Catalonia has been and is a place of peace and welcome,” Carles Puigdemont, the Catalan president, said in a statement.

Ada Colau, the Barcelona mayor, tweeted: “Terrorism will not stop us being who we are, a city that is open to the world.”

Nevertheless, people were understandably nervous. “Now every time I walk around the centre I’ll be looking over my shoulder,” said Alex Bedford Vilarrubias (18) who lives near Las Ramblas. “All the memories of those places where I grew up and had fun are going to be tarnished by this.”

Teresa Feliu (56), who attended the rally, said: “I’m worried and furious but anxious that we show unity. Muslims are good people and I hope that people can distinguish between them and the people who did this. That’s what worries me most.”

Feliu’s son Biel (16) said he was shocked to hear that one of the suspects was only 18. “If it’s true, it’s shocking that they could capable of such a thing,” he said. “It’s another demonstration of how Islamic State operates.”

Attempts to politicise the vigil were stamped down. A woman waving a tiny Spanish flag a was rounded on by the crowd, who called on her to remove it.

Gary Fisher (57), from Notting Hill in London, a holidaymaker who attended the minute’s silence, said there was a noticeable absence of national flags.

“After the minute’s silence everyone started clapping. People were chanting ‘we shall not fear’. A woman was waving a Spanish flag, but she was shouted at to put it away. She was upset and took the flag down. Some people want to show the flag to come together as a nation. But people in the crowd were saying this was not a time for nationalism.

“After that, everyone filed out and walked slowly down Las Ramblas,” he said. “It was very moving. Everyone is very calm and dignified today. It’s back to normal.”