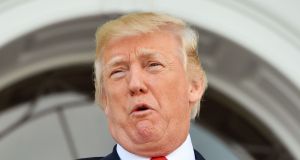 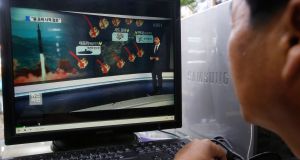 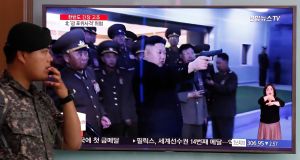 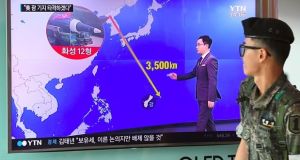 News bulletin shows the distance between Guam and North Korea at a railway station in Seoul. Photograph: Jung Yeon-Je/AFP/Getty Images

US president Donald Trump has said that perhaps his “fire and fury” warning to North Korea “wasn’t tough enough”.

Mr Trump said North Korea had “better get their act together or they are going to be in trouble like few nations have ever been in trouble”.

He said the North should be “very, very nervous” and that China can do a lot more to deal with the crisis.

The US president was addressing reporters during his holiday at his New Jersey golf club before a security briefing with top advisers.

It is the latest warning since he said earlier this week that North Korea faces “retaliation with fire and fury unlike any the world has seen before”.

South Korea earlier sought to damp down tensions between over Pyongyang’s nuclear weapons programme, telling its northern neighbour that the door to dialogue is still open.

The diplomatic move came hours after Pyongyang raised the stakes by announcing it was “seriously examining” a plan to “interdict” US forces based in the Pacific territory of Guam with four ballistic missile strikes nearby.

Gen Kim Rak Gyom, commander of the North Korean army’s strategic force, was quoted as saying the missiles would fly over Japan and hit the waters 30km to 40km from Guam.

The threat sparked alarm in Tokyo and Seoul, which called on Pyongyang to desist from sabre-rattling.

“Military tension or an armed conflict on the Korean peninsula will not benefit any country,” said the South Korean president’s office following a meeting of the national security council.

Under Moon Jae-in, the liberal president, South Korea has made overtures to the North’s Kim Jong Un, calling for military and humanitarian talks.

Concerns are particularly high in Seoul, a city of 10 million people just 50km from the highly fortified border.

South Korea’s requests have been ignored or rebuffed by Mr Kim’s regime. On Thursday, pictures of a mass rally in Pyongyang the previous were shown on state media.

“It is hard to imagine any real diplomacy kicking in,” said Kim Ki-ho, professor of international politics at South Korea’s Kyonggi University. “Tensions will probably escalate for the time being, given the confrontational personalities of Kim Jong Un and Trump. China or Russia would probably try to intervene at the last minute if there were any signs of military conflicts.”

Some analysts expressed concern that the US was not doing all it could to co- ordinate with Seoul, where Mr Trump has yet to nominate an ambassador. Several US officials sought to calm the tone after Mr Trump’s remarks.

Jim Mattis, defence secretary, also emphasised US power, saying Pyongyang’s actions “could lead to the end of its regime and the destruction of its people”.

Japan has adopted a more assertive position, warning yesterday that a North Korean missile fired at Guam would represent a threat to the country’s “existence as a nation”, and that Tokyo had the right to shoot it down.

Previously it had said it would shoot down only missiles on course for Japan. Defence minister Itsunori Onodera said a missile fired towards Guam would represent a failure of the US deterrence that protected Japan.

That failure, he said, could be taken as endangering Japan’s existence and so allow the exercise of its right to collective self-defence, activating the Aegis missile defence system launched from naval destroyers. A missile fired from North Korea to Guam would probably pass over Japan. However, military experts have expressed doubt over whether Japan could shoot it down.

If Pyongyang carries out its threat and launches missiles toward Guam, it would represent an unprecedented milestone in the already fraught relations between the United States and North Korea.

As announced by North Korea, which added detail to a plan first unveiled on Wednesday, the planned path of the missiles would cross some of the world’s busiest sea and air traffic routes.

Guam, a tropical island more than 3,000 km (2,000 miles) to the southeast of North Korea, is home to about 163,000 people and a US air base, Navy installation that includes a submarine squadron, a Coast Guard group and roughly 6,000 US military service members.