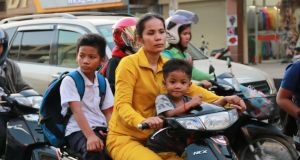 A mother takes her children to school by motorbike in Phnom Penh. Photograph: Nevenka Lukin

Almost every day brings fresh news that sends jitters through Cambodia’s human rights community. On November 16th, the latest update was that the supreme court, prompted by the government and facilitated by controversial amendments to the law on political parties, had ruled to dissolve the opposition Cambodia National Rescue Party (CNRP).

The government of Hun Sen is convinced the increasingly popular CNRP, with help from the US, has been plotting what he calls a “colour revolution”. Two days previously, police arrested two journalists, former employees of the US-funded and recently closed Radio Free Asia, and accused them of espionage, a charge that carries jail terms of up to 15 years.

Hun Sen’s paranoia runs deep. Some 20 radio stations and a newspaper have been shut down in the last three months. In August, the government expelled a US-funded NGO, the National Democratic Institute, and has warned other foreign-backed civil society organisations that they are next.

Shortly after the supreme court ruling, newly tailored election laws were implemented to distribute most of the CNRP’s 55 seats in the 123-member National Assembly among parties that won none in the last elections.

The elimination of the only political force likely to pose a threat to Hun Sen in polls next July has come, not so much as a surprise, but as a worrying confirmation that the kingdom’s long journey towards democracy and development has taken a dangerous turn at the hands of the ruling Cambodia People’s Party (CPP).

The odds were stacked against the opposition long before the court ruling: The president of the supreme court is a Hun Sen loyalist and long-time member of his party’s inner circle. Opposition leader Kem Sokha, whose CNRP won 44 per cent of the popular vote in 2013 elections and rattled the ruling party with significant gains in local polls in June, was already behind bars, awaiting trial since September on a charge of treason that has been condemned internationally and which carries a sentence of up to 30 years.

And Hun Sen, former Khmer Rouge soldier turned prime minister – the world’s longest serving, after 32 years of power consolidation – has talked of spending another decade in office. Comparisons with Zimbabwe’s Robert Mugabe are frequent in the many upmarket coffee houses and restaurants of Phnom Penh.

What has shocked rights activists is the speed at which the political landscape has been reshaped and a new climate of fear established. November 16th is now etched in local memory as the date on which the worst violation of political rights in decades was committed against Cambodians.

“In the past 48 hours, I’ve thought, Wow, this is like going back prior to the UN mission in 1992. To go back to a one-party state is like going back 30 years ago... How can we go backwards so far, so very fast? I could not believe it,” says Naly Pilorge, deputy director of advocacy at the Cambodian League for the Promotion and Defence of Human Rights at her office in Phnom Penh.

“We have a hard time with the concept that over 44 per cent voted for the opposition party, 3 million people, and it’s literally all signs of it now are in the garbage. People have fled, are frustrated, they’re scared, they’ve relocated.”

Mu Sochua, deputy leader of the CNRP, is among those who left, having been warned of plans to arrest her after her party leader’s detention in September. “On November 16th, the supreme court killed democracy in Cambodia and kept Hun Sen in power,” she wrote by email from self-imposed exile.

“The Paris Accords of 1991 obliged the signatories to ensure full protection of human rights, multiparty democracy and the conduct of free and fair elections… Ireland should urge other major signatories in the EU to convene a meeting on Cambodia to review the gaps in the implementation of the accords.”

The Department of Foreign Affairs told The Irish Times it was “deeply concerned” at the situation, and that its embassy in Vietnam, accredited to Cambodia, was “monitoring closely”. It called for the immediate release of Kem Sokha, adding that “an electoral process from which the main opposition party was arbitrarily excluded could not be seen as legitimate”.

The US has responded by cutting funding to Cambodia’s election commission; Sweden has announced a review of its development co-operation programme; and the EU warned Phnom Penh that trade preferences were reliant on respect for human rights. But Hun Sen has remained defiant. He would “welcome” a withdrawal of aid, he said, because Cambodia can now rely on China, which applauded the November 16th ruling.

Beijing’s investments in and loans to Cambodia far outstrip those of any other country – and its aid comes with no preconditions.

Cambodia’s economy relies heavily on garment exports, however, and most of these go to the EU. “China wants to bring goods into Cambodia, not buy its exports. It will fall apart for one country to rely solely on one country,” says Naly Pilorge. States that provide technical assistance to Cambodia, she says – especially to its election commission and government institutions – should reconsider.

“Why should EU, American, Japanese, Australian taxpayers be burned to support a dictatorship which now has actually no pretence of being democratic? It was always a flawed democracy, always a facade, but now there’s no pretence. Everyone has been silenced.”

Next year marks the 25th anniversary of the country’s first national elections after the Paris Peace Accords ended decades of civil war and foreign occupation. The murderous Khmer Rouge regime, which oversaw the deaths from torture and starvation of some 2 million people between 1975 and 1979, was preceded by civil war and by a carpet bombing campaign by the US, at war with neighbouring Vietnam, in which 2.7 million tonnes of explosives were used – more than the Allies dropped in the entirety of the second World War.

The defeat of the Khmer Rouge ushered in years of famine and a decade of rule by a Vietnamese-backed communist government. The 1991 Paris accords led to the United Nations’ first post-Cold War peacekeeping mission – the UN Transitional Authority in Cambodia – and paved the way for elections in 1993. The agreements established a set of guiding principles, including a commitment to liberal democracy, an independent judiciary and freedom of speech, which critics point out are being brazenly ignored.

“What we are seeing is the instrumentalisation of security forces to protect the regime, together with the rise of the military as a privileged class in society,” says political analyst Lao Mong Hay, former adviser to the opposition and a delegate at the 1991 process in Paris.

Hun Sen’s concern will be if the opposition stays united and regroups for next year, perhaps by joining an existing party; he could be quite anxious about that

Sitting in a cafe in Phnom Penh, he decries with grim candour Cambodia’s shrinking democratic space since those optimistic days. “The ruling party has been using Soviet-type legal ideology, what they call socialist legality, whereby the law becomes an instrument of power to defeat enemies.” Hun Sen is Cambodia’s shogun, he says, referring to the commanders-in-chief of feudal Japan who controlled the military and, in effect, the country.

But even with the opposition dismantled, there are signs the prime minister is worried about the CPP’s performance in next year’s polls. Recently leaked speeches by Hun Sen to party officials, published by the Phnom Penh Post, hint at insecurities over fallout from the recent clampdown.

“Over 3 million people did not vote for the government the last time,” says social researcher Meas Nee. “Hun Sen’s concern will be if the opposition stays united and regroups for next year, perhaps by joining an existing party; he could be quite anxious about that.”

For political blogger Noan Sereiboth (28), young Cambodians are demanding change but their parents are telling them not to get involved in politics. “The parents see the consequences of showing their opinion. But the young people weren’t born in war, they have education and see other things and have been to the cities. They don’t feel worried like their parents.”

* First in a series of three. Monday: Reconciliation in the post-Khmer Rouge era