Greece’s swing to the right brings some positives

Greece Letter: Like a new car, new PM Kyriakos Mitsotakis can only depreciate in value 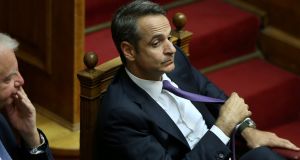 I was wrong. Despite poll predictions of a landslide to New Democracy (ND) in last month’s elections, I didn’t think they would achieve an overall majority. I expected 140 seats, leaving Kyriakos Mitsotakis, Greece’s new premier, needing a coalition. And I hoped for that, because his overall majority (158) allows him to pursue centre-right policies without restraint, to the possible detriment of the most needy.

In Greek elections, the party with the most seats is awarded a 50-seat bonus. ND won 108 seats to 86 for the outgoing Syriza government, which, ironically, had pledged to rescind the bonus as part of a more proportional representative system. The 22-seat difference indicates that Syriza will provide a vigorous opposition, giving the lie to those who have dismissed it as “Greece’s flirtation with radical left-wing populist politics”.

Mitsotakis is a scion of political dynasties: his father was prime minister from 1990-93 and his great-uncle Eleftherios Venizelos was one of the most controversial PMs of the early 20th century. ND was the result of a merger of interests between the Mitsotakis and Karamanlis families, and it’s noteworthy that the new minister for infrastructure and transport is Kostas Karamanlis, himself the cousin of two former PMs. So it’s a coalition of a different kind – involving those accustomed to power.

As a conservative, and an ex-banker, Mitsotakis surprised no one when he announced tax changes specifically to benefit the middle classes, with no such measures to alleviate the poverty in which 30 per cent of citizens are struggling.

The immediate decision to retain the priests of the Orthodox Church on the payroll of the education ministry is a signal of Mitsotakis’s traditionalism. The rapid replacement of the chief of police and the head of the state’s troubled electricity company points to normal party politics, while the decisions to enforce the 10-year-old smoking ban, to implement the national land registry and to clamp down on organised crime and terrorism are all pledges we have heard before. They mean very little.

Like a new car, Mitsotakis can only depreciate in value. Whether he can drive the economy depends not only on his relations with Greece’s creditors (the EU, IMF and Germany) but on his credibility as a reformer. When, after only three days in office, he acknowledged that “no government has so far managed to change the model of governance”, he was predicting his own failure to do so. Both he and his predecessor know that unless a new sense of meritocracy, enterprise and responsibility can transform the Greek mindscape, the national debt and external surveillance by creditors will continue indefinitely.

Klaus Regling, head of the European Stability Mechanism, is one of these hurlers on the ditch. In a post-election interview he pointed out that, although the EU can no longer impose conditions, “opinions will be expressed”, which in Eurospeak means the same thing. When Angela Merkel greeted his victory with “Mitsotakis belongs to my political family”, we can read much between the lines.

One bonus of the election was the elimination from parliament of the neo-Nazi party Golden Dawn, many of whose former MPs are currently on trial for murder and conspiracy to murder. Another bonus is the appointment of the dependable Nikos Dendias as foreign minister, at a time when a Turkish invasion of Greek waters in search of oil is an increasing likelihood.

But the most positive aspect of the new government is the recognition that tourism is a vital component of Greek recovery, indicating not only its huge contribution to GDP (25 per cent and growing) but also the paucity of other growth areas in the economy. (An astonishing aspect of the new cabinet is the complete absence of a ministry for industry and commerce.)

The appointment of the new tourism minister, Haris Theoharis, is ironic, given that under the previous conservative government he resigned in frustration as secretary general in the finance ministry, because he could not command resources to carry out his job of masterminding tax collection.

But Theoharis’s intention to secure more foreign investment in tourism runs counter to his recognition that the protection of the environment is a key issue in sustaining touristic attractions. The more infrastructure that is created to accommodate rising numbers, the more it encroaches on natural beauty and ancient monuments. Furthermore, his intention of co-ordinating the public and private sectors is a pipedream.

A major drawback in Mitsotakis’s cabinet is the lack of women: only two out of 22 ministers are female. Mitsotakis’s explanation, that women are reluctant to get involved in politics, is absurd, when 20 per cent of Greek MPs and 25 per cent of MEPs are women. But it points to the fact that women in Greece have yet to establish the benchmarks of both respect and opportunity that equality and common sense demand.

There is one major obstacle to all of Mitsotakis’s promises: the resistance of public administration to change, due to the blatant self-interest of bureaucrats who scorn meritocracy and transparency.