Moscow joins fight against wave of wildfires in Siberia

More than half a million Russians have demanded that authorities do more to tackle vast wildfires in Siberia that environmentalists have dubbed an ecological catastrophe, but which officials have said would be "pointless" to put out. Video: Reuters 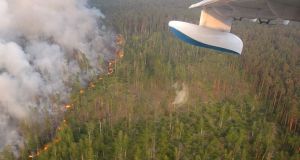 Local people have been appealing for help since the wildfires broke out in June, but Moscow has shifted responsibility to regional governors. Photograph:

Russian emergency services have finally moved to control a wave of wildfires rampaging across Siberia, but environmentalists said it was too late to prevent an environmental disaster.

Wildfires in the forests and taiga of eastern Russia already covered some 3 million hectares (an area as large as Portugal) and were spreading rapidly, the Russian emergencies ministry said on Wednesday. A thick smog hanging over much of the Irkutsk, Krasnoyarsk, Buryatia and Yakutsia regions was disrupting air traffic and causing health problems.

Local people have been appealing for help since the wildfires broke out in June. But Moscow has shifted responsibility to regional governors. They have faced down calls for action saying it was pointless to waste scarce funds fighting remote fires that did not threaten inhabited regions.

Dmitri Medvedev, the Russian prime minister, intervened this week, ordering governors in all stricken areas to take personal control of the crisis. “No general statements, no pointing fingers in the air [to the federal authorities],” he told a government meeting on Tuesday.

The Russian emergencies ministry began co-ordinating efforts to localise and extinguish the fires on Wednesday, saying it had deployed aircraft and personnel to join local firemen and rescuers on the ground. A state of emergency has been declared in four Siberian districts.

Alexander Chupriyan, the deputy Russian emergencies minister, said he agreed with local officials that the high cost of the fire-fighting campaign was not justifiable in economic terms, but officials could not ignore the plight of people living in the region. “What talk can there be of economics when hundreds of villages are engulfed in smoke and citizens are appealing for medical help,” he said.

Greenpeace warned that the wildfires had long ceased to be a local problem and become an “ecological catastrophe on the scale of the whole country”. A toxic smog that has already engulfed major Siberian cities was being carried west in the wind to the populous Urals region.

Russian social media users have been complaining for weeks about the government’s failure to address the escalating disaster as Siberia burns. Emotive photographs posted on the online “Save Siberia” campaign show black smoke bellowing out of forests and reindeer fleeing with their antlers in flames. More than 290,000 people signed a petition demanding action to protect citizens from fire and smog that was delivered by Greenpeace to the Russian government this week.

Wildfires frequently occur in Siberia in summer, but this year they have been exceptionally large. Like the devastating floods that hit Siberia’s Irkutsk region in recent weeks, the fires appear to have been caused by abnormal weather conditions.

“Changes in the climate lead to the most unexpected and unpleasant consequences when we drown and burn at the same time,” Vladimir Chuprov, the head of Greenpeace Russia, said on Wednesday. “To avoid a catastrophic scenario it’s necessary to reduce carbon gas emissions, restore forests and change peoples’ wasteful use of the planet’s resources.”