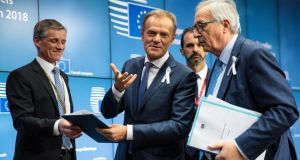 European Union leaders responded cautiously on Friday to Donald Trump’s decision to defer tariffs on EU steel and aluminium exports to the US.

While welcoming the exemption, they expressed concerns about the deferral being limited to 30 days.

Tariffs would be reimposed, it was made clear, if trade talks with the US did not deliver what the US president called a more “reciprocal” trading relationship.

European Council president Donald Tusk demanded that the exemption be made permanent.

The EU leaders, meeting in Brussels on Friday, said they supported “a dialogue on trade issues of common concern” with the US, while warning that they remained ready to retaliate against the tariffs, which they criticised as an “inappropriate remedy” for global overcapacity in steel and aluminium production.

Mr Trump said he would also suspend tariffs for Argentina, Australia, Brazil, South Korea, Canada and Mexico until May 1st as discussions continue.

Taoiseach Leo Varadkar said the tariffs were not acceptable. Ireland produces 30 per cent of European aluminium, he said, but it did not export it to the US. However, Ireland was very vulnerable to price fluctuations in the world market.

Leaders made clear that while they were willing to take part in immediate high-level discussions with the US on trade issues, they were unwilling to be drawn into any commitment to trade concessions.

French president Emmanuel Macron said the 40-day reprieve granted by Washington was like Mr Trump pointing a gun at Europe. “We will talk about anything in principle with a country that respects World Trade Organisation rules. We will not talk about anything when it is with a gun to our head,” he told a news conference.

German chancellor Angela Merkel said Europe was trying to avoid a trade war in which everyone would lose while EU trade commissioner Cecilia Malmström urged that the talks “should not be subject to artificial deadlines” .

A French government spokesman said of earlier plans to retaliate against the tariffs if imposed that “Europe has clearly stated its intention to riposte and enter a trade war . . . it’s a good thing that president Trump changed his mind on tariff increases”.

Belgium’s prime minister Charles Michel said he was not impressed at the suspension of tariffs until May 1st. “I have the impression that the US leader wants to negotiate with the European Union by putting a gun to our head. That’s a strange way to negotiate with an ally.”

The summit declaration, in a firm implicit rebuke to Mr Trump, “reaffirms the EU’s commitment to an open and rules-based multilateral trading system with the WTO at its core, firm in the belief that free and fair trade is one of the most powerful engines for growth.”

Europe says it wants to avert a trade war but the European Commission has proposed a series of counter-measures if the White House hits EU producers.

It would launch a challenge at the World Trade Organisation, consider measures to prevent a surge of metal imports into Europe and impose import duties on US products to “rebalance” EU-US trade.

The counter-measures would include EU tariffs on US orange juice, tobacco, bourbon and Harley-Davidson motorbikes.