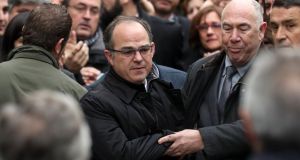 Catalan politician Jordi Turull returns to the supreme court during a break in proceedings as part of an investigation into Catalonia’s banned bid for independence in Madrid on Friday. Photograph: Susana Vera/Reuters

Spain’s supreme court has remanded in custody five Catalan politicians, including the candidate for president of the region, Jordi Turull, for their alleged involvement in last autumn’s failed independence bid.

The other politicians who were jailed without bail on Friday were former Catalan government ministers Josep Rull, Raül Romeva and Dolors Bassa and the former Catalan parliament speaker Carme Forcadell.

Marta Rovira, secretary general of the Catalan Republican Left (ERC) party, failed to appear in court and announced that she had fled the country. Ms Rovira is the seventh Catalan politician who has left Spain to avoid the country’s judiciary in recent months. Local media reported that she had travelled to Switzerland.

On Thursday, Mr Turull, a former Catalan government spokesman, failed to win a first-round investiture vote to become president of the region. He is the third candidate to be chosen by the main pro-independence parties since December’s regional election, after the judiciary blocked the first two choices for the post: former president Carles Puigdemont and former rank-and-file independence leader Jordi Sànchez.

In the first-round ballot, Mr Turull received 64 votes in favour, falling four votes short of the majority he needed. The abstentions of the Popular Unity Candidacy (CUP) prevented him from winning the chamber’s support.

A second vote is due to be held on Saturday, although Mr Turull’s imprisonment means he will not be able to attend.

Supreme court judge Pablo Llarena said those imprisoned were flight risks and that there was also a risk they would offend again.

Mr Turull was one of 13 politicians the supreme court charged with rebellion on Friday – a crime punishable with a jail sentence of up to 30 years. Also among them was Mr Puigdemont, who has been in self-imposed exile in Belgium for the last five months, and Oriol Junqueras, the former deputy president who has been in jail during that time, along with three other colleagues.

In court documents, Judge Llarena noted that those charged had “the will to incorporate the use of force in order to achieve a secession which they did not want to relinquish”.

The news drew an angry response from the independence movement. “The decisions of the supreme court are arbitrary: they are not justice, they are the revenge of an authoritarian state,” said Carles Campuzano of the Catalan Democratic Party (PDeCAT).

But unionist parties welcomed the decision. After it emerged that Ms Rovira had left the country, Albert Rivera, leader of the liberal Ciudadanos party, tweeted: “Will the last coup-monger turn out the lights . . .”

Demonstrations against the court’s decisions were organised on Friday night in Barcelona and other Catalan cities.

With the first-round investiture vote having taken place, the constitutional clock is now ticking and the Catalan parliament must choose a new president within two months or new elections will be held, probably in July.

“I’m not in favour of the election being repeated, that would not be good,” said Spanish prime minister Mariano Rajoy. “People vote and politicians have the obligation to solve problems and not create more of them.”