Greece has become xenophobic towards its own people 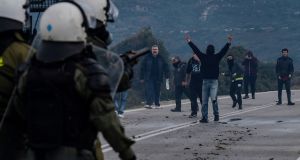 Greek riot police clash with demonstrators during the construction of a migrant camp near the town of Mantamados on the island of Lesbos, on February 26th. Photograph: Aris Messinis/AFP

The death of Greek writer Alki Zei, at the age of 97, closes not only a life of distinguished authorship but also a period of Greek history which is about to come under review. Greece enters a decade of commemoration starting in 2021 with the bicentenary of the war of independence from the Ottoman empire, and also embracing the centenary of the Anatolian Catastrophe (1922), when 1.5 million ethnic Greeks were expelled from their homes in western Turkey (Anatolia) in exchange for the Turks who lived in northeast Greece.

Many thousands of those refugees settled on the islands of Lesvos (also known as Lesbos), Chios and Samos. It is a bizarre coincidence that, since 2014, almost the same number of refugees, mostly from Afghanistan and Syria, have arrived on Greek island shores. Zei grew up partly in Samos, her mother’s island, the tragic site today of confrontation between Greek citizens and their own security forces.

The fact that Turkey is itself due to celebrate the centenary of the modern republic in 2023, is a salutary reminder that the entire region owes its political status to the events from 1912 (the first Balkan war) to 1923.

The events of 1922 had far-reaching consequences, exacerbated by the civil war of 1943-48 and the military dictatorship of 1967-74. The divisions in Greek society remain both explicit and subcutaneous.

Acclaimed for her classic semi-autobiographical novel Achilles’ Fiancée (1987), Zei personified what Neni Panourgia has called “dangerous citizens” – those whose quest for freedom pushed them to the margins of society. As a consequence, Zei lived in the then USSR, before returning to Greece in 1964. The advent of the junta in 1967 sent her away again, to Paris.

Zei, as a committed socialist, had no place in post-war Greece, when many on the left were condemned to internal exile in prison camps on the islands: artists like Mikis Theodorakis (who later became a communist MP) or the poet Yiannis Ritsos. The Greek government’s desperate measures today, in building detention centres for refugees (like the “direct provision” system in Ireland), echo that strategy of exclusion.

Ten years ago, it was inconceivable that Syriza, a party with its historical roots in communism, could take power from 2014 to 2019. Today, it is publicly licking its wounds after its failure to solve not only the economic and refugee crises but to heal the self-inflicted injuries of history.

But incoming prime minister Kyriakos Mitsotakis of New Democracy is no better-suited to take on that role: he may contain and cover up the problems, but he cannot eradicate them. He, too, is a prisoner of history. As Zei’s novel tells us, “We can’t forget the old days; they’re our whole life.”

Achilles’ Fiancée depicts the self-discovery of a young woman on a trajectory very similar to Zei’s own, through the years 1940 to 1981, questioning, and rejecting, labels of identity. In tearing apart the political themes of the Greek resistance to the Nazis, the civil war and the junta, the novel also exposes the tensions and torsions of modern Greece, which are the legacy of its history. In a country about to celebrate the bicentenary of its independence, the emotional and ethical canvas is spattered with the consciences of resistance and dissidence.

Today we have a civil crisis where Greek police shoot teargas and stun grenades at their fellow citizens on the eastern islands. But this has to be seen parallel to the grievous damage done daily to the quality of life throughout Greece, to the old and those young people who are still here.

Many Greeks take heart from the fact that the former head of the supreme court, Katerina Sakellaropoulou, becomes president of Greece this month. She joins a number of women who, like Zei, are distinguished for their unrelenting honesty, clarity and wisdom: women of the calibre of novelists Eugenia Fakinou, Maro Douka and Ioanna Karystianni (herself a potential candidate for the presidency in 2015).

But as titular head of state, Sakellaropoulou will preside over a country where a public prosecutor can describe a former minister of justice as “the definition of lawlessness”; where the “brain drain” generation is all but irreversible; where young people pay 60 per cent of their income in rent; where incentives for foreign investment are frequently stalled by bureaucratic procedures; where the single greatest asset, the tourist industry, is chaotic; a country, even, which allows the systematic eradication of the traditional fishing vessel, the caique, on foot of an EU directive.

In recent years, the grandchildren of the Anatolian refugees, empathising with the experience of the new seekers of asylum from war and terror, welcomed the arrivals. A greater example of humanitarian compassion can hardly be imagined. In Greek “xenos” means both “stranger” and “guest”, so that hospitality is both a challenge and a responsibility. Xenophilia is far stronger than xenophobia, but these days Greece has become xenophobic towards its own people – strangers to themselves.

Zei and her fellow-travellers of the left often lost their way because, as in today’s economic, political and bureaucratic crises, the train is constantly shunted into a siding for repairs, or to avoid insuperable obstacles on the line ahead, or simply to check if the wheels are still going round. As her central character asks, “How many times have we said we’ll start all over again?”