Europe Letter: Pesco initiative is not an EU army but may niggle at neutrality fears 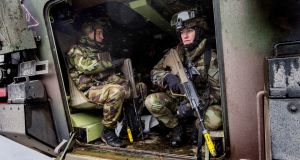 Irish Defence Forces in a mowag tank during an exercise in the Glen of Imall: Irish involvement in Pesco is a significant means of enhancing our Defence Forces’ capabilities. Photograph: Brenda Fitzsimons

When EU foreign and defence ministers meet in Brussels on Monday, a special signing ceremony will be held to launch the next phase of growing European military co-operation. Twenty-two states will pledge themselves to embark on what has been christened in the acronym-rich world of political and security co-operation Permanent Structured Co-operation on security and defence (Pesco).

Pesco, a Franco-German initiated project, is a creature of the Lisbon Treaty (articles 42 (6) and 46 of the TEU), a framework for resource-pooling and enhancing the effectiveness of member states’s cash-strapped defence forces, particularly their interoperability and research programmes, to better equip them for missions under the EU’s Common Security and Defence Policy (CSDP).

Currently there are 13 such missions, ranging from military peacekeeping to civilian support. The Defence Forces have participated in many EU military operations, while Irish civilians are currently serving in Iraq, Afghanistan, Kosovo, Georgia and the Palestinian Territories. Members of An Garda Síochána are also serving in the EU Rule of Law Mission in Kosovo.

Pesco is not, it should be noted, a European army, even in embryonic form, nor even a military alliance, but a formalised, binding mechanism to improve the collaboration of independent member-state forces. “A way of doing better what we already do,” as one senior EU official put it.

A cautious Ireland will not be taking part in the Pesco notification ceremony on Monday, only too aware that any further integration into EU military co-operation is likely to prompt Dáil claims, however exaggerated, that the Government is further diluting, or even abandoning, the country’s neutrality.

But Dublin will sign up. Taoiseach Leo Varadkar has signalled his support for the project and the Department of Defence will propose to Cabinet in the next few weeks that Ireland should join Pesco before its formal launch at the December EU summit. The issue will then go before the Dáil.

Our involvement is seen as a significant means of enhancing our Defence Forces’ capabilities, but also an important political signal to fellow member states that, in the Brexit era, Ireland is committed to engaging centrally in every aspect of EU integration. Despite our adamant refusal to join Nato, that includes defence co-operation, though the latter, with its mutual defence guarantee, will remain the vehicle for what is known as “territorial defence”.

The more a variable-speed EU emerges, the more Ireland is determined to be seen as a core member of the advance guard.

In a similar vein, it comes after the Naval Service has signed up recently to the CSDP Sofia naval operation off Libya, and our Defence Forces chief of staff, Vice-Admiral Mark Mellett, unsuccessfully threw his hat in the ring to become chair of the EU’s Military Committee. On Tuesday, in a five-way contest, he was runner-up to the Italian nominee.

Although France sees Pesco as a stepping stone to what the pledging document refers to as a “new level in the progressive framing of a common union defence policy”, Irish officials point out that Irish concerns about that level of ambition are met with specific and familiar guarantees: although not mentioning the “n” word, Pesco will be run “taking into consideration the specific character of the security and defence policy of all member states”.

And while pledging in a general way to commit forces and resources to common missions, the document allows that this will be “without prejudice to any constitutional constraints”. In Ireland’s case that remains the “triple lock” of Dáil, UN and Government approval for military missions abroad.

The Pesco pledge that may cause most eyebrows to be raised in Ireland is that we would be committed to “regularly increasing defence budgets in real terms”.

While Pesco will function under the broad remit and supervision of the EU’s high representative for foreign policy, Federica Mogherini, member states signing up will retain their autonomy to contribute to particular projects under its ambit and to specific CSDP missions.

Some 47 Pesco projects have to date been suggested by member states, in no particular order of priorities: these range from a “centre of excellence for EU training missions”, to a “European medical command”, a logistics hub, officer training, satellite capabilities, deployable disaster-relief capacity, research on a new battle tank, cyber training and rapid response teams, diver training . . .

Pesco is also to be closely connected to the new Co-ordinated Annual Review on Defence, a rolling assessment of individual member states’ capabilities and the gaps in their resources, and the new commission-run European Defence Fund, which will put EU money into weapons research.