Giuseppe Conte given mandate to be next Italian PM 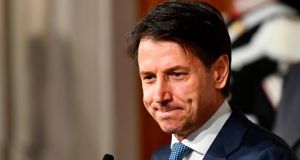 Giuseppe Conte has been given a formal mandate to become Italy’s next prime minister, heading a coalition of two populist parties that is set to take power amid fears that it will challenge Rome’s relationship with Europe.

The 53-year-old civil lawyer and academic, received assent from Sergio Mattarella, Italy’s president, to become premier after fending off criticism about his lack of political experience and allegations that he embellished his curriculum vitae.

Luigi Di Maio, the Five Star leader, and Matteo Salvini, the head of the League, identified the little-known Mr Conte as a compromise choice for prime minister this week after the two Eurosceptic parties struck a deal on a common platform of fiscal expansion, curbs on immigration and a pro-Kremlin foreign policy shift.

Policymakers across EU capitals have grown increasingly concerned as Five Star and the League have grown ever closer to power. Investors have abruptly sold Italian assets – a trend that continued on Wednesday, with shares falling and bond yields rising in a reflection of economic uncertainty.

However Eurosceptic politicians from across the continent have hailed the ascent of Five Star and the League – the first time one of the euro zone’s largest economies will be government by such avowedly anti-establishment parties.

The mandate handed to Mr Conte on Wednesday night is not final. The law professor from the University of Florence – who hails from a small town in the southern province of Puglia – will have to return to Mr Mattarella with an acceptable slate of ministers to fill key cabinet positions.

If Mr Mattarella does not agree with the names, a stand-off could ensue.

Doubts have already surfaced over Five Star and the League’s proposal of Paolo Savona, an octogenarian Eurosceptic economist, for the key position of finance minister. Mr Mattarella had opposed the choice.

Giancarlo Giorgetti, Mr Salvini’s top aide and a senior MP, is now the frontrunner to lead the finance ministry, according to one person familiar with the talks.

“Mattarella may say – Conte is okay but I want my hand on the ministers,” said Lorenzo Pregliasco, co-founder of Youtrend, a political analysis firm.

Once the cabinet is approved by the president, Mr Conte and the new government will be sworn in, with the final hurdle being a vote of confidence in both houses of parliament.

After Mr Di Maio and Mr Salvini proposed Mr Conte as prime minister on Monday, doubts about his suitability to the post flared up, raising questions about whether the populist duo would back away from their candidate.

However Mr Di Maio and Mr Salvini stuck by Mr Conte, putting pressure on Mr Mattarella to give him the mandate.

Mr Di Maio said Mr Conte’s appointment sealed the beginning of a new political era – which he has described as Italy’s “Third Republic” – in which traditional ideologies have been supplanted by direct democracy.

“We’re ready to go,” the League said in a statement.

Analysts have questioned how effective Mr Conte will be as a political novice in a government where Mr Di Maio and Mr Salvini – two young, vocal and ambitious leaders – would expect to make many decisions behind the scenes.

“Five Star and the League made a deal on a platform but being in government means making hundreds of decisions every day,” said Mr Pregliasco. – Copyright The Financial Times Limited 2018