Guy Hedgecoe in the Basque Country 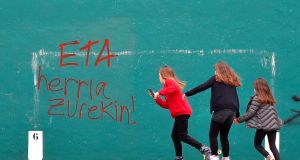 Girls skate next to a graffiti reading in Basque “ETA, the people with you” in the Spanish Basque village of Hernani. The militant separatist group announced its dissolution earlier this month. Photograph: Ander Gillenea/AFP/Getty Images

Within a week of the disbandment in early May of the separatist terrorist group Eta, the Basque Country’s parliament started debating proposals for a revision of the region’s relationship with Madrid.

Some of the language contained in those initiatives echoed the ambitions of an independent Basque state that Eta once harboured. The Basque Nationalist Party (PNV), which governs the region, described the Basques as “a people with their own identity”, who have “a linguistic, cultural and legal-institutional heritage which has lasted throughout history”.

The PNV’s proposal also called for the Spanish region’s links to the French Basque Country and the neighbouring region of Navarre to be formally acknowledged, a long-standing claim of pro-independence Basques. Unionist forces such as Spain’s governing Popular Party (PP) and the Socialist Party baulked at what looked to them like the kind of proposal that pro-independence parties pushed through the Catalan parliament, a few hundred kilometres to the east, ahead of their recent bid to break away from Spain.

However, as Basques discuss the kind of territorial model they would like to present to Madrid for eventual negotiation, the Catalonia factor looks more likely to keep their separatist ambitions in check rather than firing them up.

“The idea of self-determination has not been rejected altogether, but it’s on standby,” says Gorka Landaburu, a Basque journalist and editor of the current affairs publication Cambio 16. “The Basques aren’t going to copy the Catalans.”

Catalonia’s nationalist government defied the courts by staging a chaotic referendum on secession last October, which led to the region’s parliament declaring independence. The Spanish government responded by sacking the Catalan cabinet and introducing direct rule, while the courts have jailed several independence leaders as others have fled abroad, including former regional president Carles Puigdemont.

The PNV, which has governed the Basque Country almost uninterruptedly since the restoration of the region’s parliament in 1980, has a long secessionist tradition whose political expression tends to wax and wane depending on circumstances. In 2005 the party’s regional president, Juan José Ibarretxe, failed in an audacious bid to persuade the Spanish parliament to give the Basque Country powers that came close to full independence. But the current regional president, Iñigo Urkullu, is a more cautious and pragmatic figure. In the Basque parliament this month, he appeared to endorse the idea of a referendum in his region, but not one which offers full independence.

“My aim is to use that concept [of self-determination] to reinforce and increase Basque self-government,” he said, warning that aiming for something more ambitious might cause the region to “lose the opportunity we have before us”.

Urkullu’s feelings about recent developments in Catalonia are well documented. In the wake of last October’s referendum he was in frequent contact with Puigdemont and urged the Catalan leader to step back from his unilateral course and return to the constitutional path by calling elections. Puigdemont shunned Urkullu’s advice, a decision which led to the independence declaration and direct rule.

Since then, Urkullu and his PNV have watched the Catalan independence movement with a sympathetic yet sceptical eye, while being openly critical of the Spanish government’s handling of the situation.

The Basque Country has the most autonomous powers of any of Spain’s 17 regions, controlling its own education, healthcare, police and taxes and with its own language, euskera. But it is also distinct for another reason: the terrorism of Eta, which claimed over 800 lives between 1968 and 2010 and which finally announced its dissolution on May 3rd.

Many observers believe the lingering trauma of Eta’s separatist violence will act to discourage Basques from pursuing independence in the near future. But some nationalists claim that neither the legacy of Eta nor developments in Catalonia will hinder the prospect of increased Basque sovereignty.

There hasn’t been a push by Basques to join Catalonia, but rather a tendency to view it from a distance and look at the risks involved

“What Catalonia has demonstrated is that this is a path which can be used and it can be done in a political and democratic way,” Arnaldo Otegi, leader of the leftist pro-independence coalition, EH Bildu, told The Irish Times. A former member of Eta himself, Otegi has watched the process with admiration. However, he points to mistakes by the independence movement in Catalonia, suggesting that he, like Urkullu, sees developments there as a cautionary tale.

“It’s true that they’ve had certain problems from which we have to take lessons,” Otegi says. “First that they haven’t managed to get more than 50 per cent popular support, which is important, although I think there is a majority in favour of independence.”

He adds: “Second, they haven’t yet managed to get the support of the international community, and the third problem has been who controls the territory after a declaration of independence.”

Otegi is hopeful that the European Union will eventually offer support to the Catalan secessionist movement in order to end the political crisis in one of its biggest member economies.

But if, as he says, an independence drive needs the support of more than half of citizens, any such project in the Basque Country looks fanciful.

Only about 17-20 per cent of Basques want independence, according to María Silvestre, a sociologist at Deusto university, who says that figure has changed little in recent months.

“There hasn’t been a push by Basques to join Catalonia, but rather a tendency to view it from a distance and look at the risks involved,” she says.

One of the secondary effects of the Catalan crisis has been to generate a hardening of attitudes on the part of unionists. It’s a phenomenon which can be seen in the proliferation of Spanish flags hanging from apartment balconies across Spain in recent months, but also in the tough rhetoric of parties on the right such as the PP and the relatively new force, Ciudadanos. The latter has even spoken out against the Basque region’s unique financial arrangement with Madrid.

Led by Albert Rivera, Ciudadanos has little support in the Basque Country. But a recent surge in the polls, on the back of the polarisation caused by the Catalan stand-off, makes it a major force on a national level.

Basque nationalists, Landaburu says, “are worried that Rivera will become prime minister and instead of increasing regional autonomy, will cut it back”.

But, as it has shown recently with a demand for the Spanish government to raise national pensions, the PNV is adept at both playing to its voters in the north and at driving a hard bargain with Madrid in exchange for parliamentary support. Spain’s national political landscape is as fragmented as at any time since the democratic transition, a situation the PNV might be able to turn to its advantage by using its seats in the national parliament as leverage.

In the meantime, Basques seem content to observe events in Catalonia, rather than emulating them.