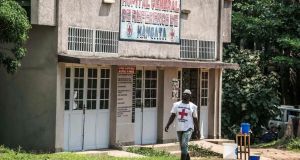 An International Red Cross Committee staff member walks in front of a quarantine zone at the hospital of Wangata in Mbandaka on Tuesday. Photograph: Junior D Kannah/AFP/Getty Images

Three patients infected with the deadly Ebola virus slipped out of an isolation ward at a hospital in the Congolese city of Mbandaka, an aid group said, as medics raced to stop the disease spreading in the busy river port.

Two patients left the hospital on Monday, said Henry Gray, head of the Médecins Sans Frontières (MSF) mission in the city, before being located the following day.

The World Health Organisation’s (WHO) representative in Congo, Yokouide Allarangar, said one was found dead and another was sent back to hospital and died shortly afterwards.

Mr Allarangar, speaking to reporters in the capital Kinshasa, said the two patients had left the hospital with the help of family members before heading to a “place of prayer”.

Health ministry sources, who asked not to be named, said two police officers had been deployed to help track them down.

Another patient left on Saturday, but was found alive the same day and is under observation, he said.

“This is a hospital. It’s not a prison. We can’t lock everything,” he said.

WHO spokesman Tarik Jasarevic said health workers had redoubled efforts to trace contacts with the patients. Health workers have drawn up a list of 628 people who have had contact with known cases who will need to be vaccinated.

“It is unfortunate but not unexpected,” he said. “It is normal for people to want their loved ones to be at home during what could be the last moments of life.”

The cases represent a setback to costly efforts to contain the virus, including the use of experimental vaccines, and shows efforts to stem its spread can be hampered by age-old customs or scepticism about the threat it poses.

The report came as another WHO official warned that the fight to stop Democratic Republic of Congo’s ninth confirmed outbreak of the hemorrhagic fever had reached a critical point.

“The next few weeks will really tell if this outbreak is going to expand to urban areas or if we’re going to be able to keep it under control,” WHO’s emergency response chief Peter Salama said at the UN body’s annual assembly.

“We’re on the epidemiological knife edge of this response.”

Health officials are particularly concerned by the disease’s presence in Mbandaka, a crowded trading hub upstream from Kinshasa, a city of 10 million people. The river runs along the border with the Republic of Congo.

Mr Allarangar said health officials received an alert on Wednesday from Kinshasa’s main hospital about a patient and had dispatched a team to investigate. However, he said this was not yet considered a suspected Ebola case and two or three other such alerts had turned out to be false alarms.

The outbreak, first spotted near the town of Bikoro, about 100km south of the city, is believed to have killed at least 27 people so far.

The WHO said health workers were following up on three separate transmission chains for cases in Mbandaka’s Wangata neighbourhood – one linked to a funeral, one to a church and another to a rural health facility.

“It’s really the detective work of epidemiology that will make or break the response to this outbreak,” Mr Salama said.

The disease was first discovered in Congo in the 1970s. It is spread through direct contact with body fluids from an infected person, who suffers severe bouts of vomiting and diarrhoea.

More than 11,300 people died in an Ebola outbreak in the West African countries of Guinea, Liberia and Sierra Leone between 2013 and 2016. – Reuters