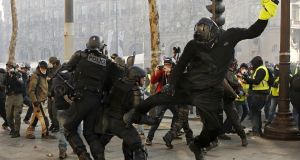 A yellow vest protester hits a riot police officer with his leg on the Champs Élysées during the 18th consecutive national Saturday protest in Paris. Photograph: Yoan Valat/EPA

The authority and competence of President Emmanuel Macron and his interior minister Christophe Castaner have been called into question after hooligans laid waste to much of the Champs-Élysées on Saturday. It was the worst rioting since last December 1st.

By Saturday night, 280 people had been arrested, 29 members of the security forces and about 60 gilets jaunes or yellow vest demonstrators were injured. Eighty shops, restaurants, newspaper kiosks and a bank were looted and/or set ablaze.

Police said there were a total of 10,000 gilets jaunes on the Champs-Élysées, 30,000 across France. By contrast, about 45,000 people marched in a separate, peaceful demonstration in Paris protesting inaction against global warming. Though the climate protesters far outnumbered the yellow vests, attention focused on the sacking of the Champs-Élysées.

The first clashes occurred just after 10am, at the top of the avenue. At about 10.30, men in black masks surrounded by gilets jaunes attacked a gendarmerie vehicle. The gendarmes fired tear gas and stinger grenades.

Security forces were concentrated at the bottom of the Champs Élyséés, on the approaches to the presidential palace. David Michaux, the secretary general of the Unsa police union, said he was “scandalised” that 12 companies of CRS riot police were used to “sanctuarise” the Élysée while hooligans went on the rampage farther up the avenue.

Around 12.30, the rioters attacked Fouquet’s, the historic brasserie that was James Joyce’s favourite. They hurled champagne bottles at police, knocked over tables and broke china. The former president Nicolas Sarkozy celebrated his election victory at Fouquet’s in 2007. “Sarko broke everything,” said graffitti scrawled on the restaurant.

“This is a symbol, which is why it makes me happy,” a yellow vest in front of Fouquet’s told France Info radio. “I’m against attacking small businesses, but I don’t give a damn for Fouquet’s.” In late afternoon, demonstrators returned to set fire to the red and gold awnings. Some took selfies in front of the burning building.

At about 1.30pm, demonstrators set fire to the Banque Tarneaud, in the avenue Franklin Roosevelt. Inhabitants of the building panicked when smoke filled their apartments. A woman stood crying at a second floor window with a baby in her arms. A policeman ran up the stairs to rescue them.

The gilets jaunes had promised an “ultimatum” for Macron on their 18th consecutive Saturday of demonstrations. Numbers had dwindled the previous week, and the authorities let down their guard. Yet the gilets jaunes gave ample warning. “Now we’re going to get serious. Act XVIII is on the way and Macron, you should watch out because mobilisation will be up,” Eric Drouet, the lorry driver who is a leading figure in the movement, tweeted.

Saturday’s riots showed how radicalised the movement has become. Ordinary gilets jaunes used to try to hold back the hooligans. No more. Yellow vests mocked those who had said they were running out of steam. “Before, the black blocs scared everybody,” a gilet jaune called John told Le Monde. “Now we see them as a plus. They’re the ones who push things forward. We are too pacifistic.”

Macron had planned to take the weekend off with his wife, skiing in the Pyrenees, which he visited often in childhood. Social media postings of Macron grinning on the slopes and pouring wine for friends against a backdrop of snow-capped mountains had a devastating effect.

Macron rushed back to Paris on Saturday evening to attend a crisis meeting at the interior ministry. He promised to take “strong, additional decisions” to prevent a repeat of such violence in Paris. “A lot has been done since November but clearly, today shows that we’re not there yet,” he continued. “All those who were there were accomplices” to the sacking of the Champs-Élysées, he added.

Macron had launched a “great national debate” in response to the demonstrations. He showed skill and energy in meetings with groups of citizens across France, and his popularity had returned to pre-gilets jaunes levels. Now Saturday’s riots risk wiping out the progress he had made. The tenacity of the movement has surprised everyone. Violent protests by a small, hardcore minority which demands Macron’s departure look set to continue for the foreseeable future.