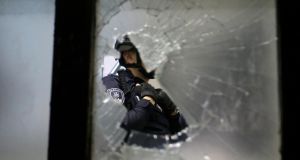 A riot policeman the far side of a broken window at the Radio Television of Serbia (RTS) headquarters in Belgrade after people protested over the smothering of democratic freedoms. Photograph: Andrej Cukic

Serbian president Aleksandar Vucic has called anti-government protesters “fascists, hooligans and thieves” after they forced their way into the state television centre on Saturday during protests to demand his resignation and pro-democracy reforms.

As Mr Vucic denounced his critics on Sunday, thousands gathered again in central Belgrade and formed a human chain around the presidential administration to stop him immediately leaving the building.

They later marched to police headquarters to call for the release of 10 people arrested on Saturday, when riot police dragged dozens of protesters from the television centre as they unsuccessfully sought airtime to broadcast their demands.

It was the 15th time that Serbians have rallied since last November, when an attack on an opposition politician sparked calls for Mr Vucic’s departure, for free and fair elections to be held, and for state media to end its pro-government bias.

The protests have been almost entirely peaceful, yet the populist Mr Vucic sought to portray his critics as radicals bent on plunging Serbia into chaos.

“Everyone taking part in this violence will be brought to justice . . . If anyone thinks political goals can be achieved through violence, they are mistaken,” he said. “I’m their target as I seek Serbia’s political consolidation and economic development,” he added.

Mr Vucic – who served as information minister under nationalist former Serbian leader Slobodan Milosevic – consistently understates the size of protests against him and has vowed not to bow to critics’ demands even if five million people took the streets.

The pledge prompted protest leaders to call their movement “One in Five Million”, and rallies against Mr Vucic’s stranglehold on power have spread to dozens of towns around Serbia – albeit with much lower attendance than in Belgrade.

The weekend’s events carried some echoes of the rallies in 2000 that finally ousted Mr Milosevic, when protesters also stormed the television centre and chanted “He’s finished!” – just as they did on Saturday about Mr Vucic, a populist who seeks EU accession for Serbia while maintaining close ties with Russia.

Protesters and police also clashed outside Albania’s parliament on Saturday, at the latest rally against the Socialist-led government of prime minister Edi Rama.

The rallies are a culmination of anger and frustration over a host of issues, from corruption and the rising cost of education to alleged vote-buying at 2017 elections and accusations of government links to organised crime.

“We have no alternative but to protest until we bring back democracy and rule of law,” said Lulzim Basha, leader of the opposition centre-right Democrats.

His party’s deputies recently relinquished their mandates in parliament, in a move strongly criticised by the European Union, which is considering whether to start accession talks with Albania in June.

Thousands also rallied peacefully on Saturday in neighbouring Montenegro to denounce graft and impunity and demand the resignation of president Milo Djukanovic, who has dominated politics in the Adriatic state for 30 years.