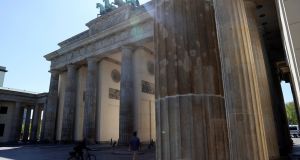 The Brandenburg Gate in Berlin. Most events marking the 75th anniversary of VE Day have been cancelled due to the Covid-19 pandemic. Photograph: Fabrizio Bensch/Reuters

Adjacent to Berlin’s Brandenburg Gate, flanked by two green tanks, wreaths of roses and carnations flutter in the spring breeze at the Soviet war memorial.

For days now, Berliners and Russian families have come here to remember the war that claimed up to 85 million lives. Up to 170,000 people alone died in the final battle for Berlin, ending the six-year world war exactly 75 years ago.

Most memorial events have been cancelled due to the Covid-19 pandemic, but documentaries, books and even a new smartphone app, “Augmented Berlin”, allow people to explore and reflect on the most ambivalent day in the German calendar. Defeat or liberation?

What seems obvious to non-Germans is still the subject of an emotional debate here: over perpetrators and victims, blame and responsibility. Some elderly Germans who remember May 1945 are using this last major anniversary to reflect on their own lingering ambivalence towards the war and witnessing first-hand the everyday events of the Holocaust.

As a child in Berlin, Gisela watched from her apartment window as Jewish neighbours, the Jakobs, were marched out of their flat and driven away by SS officers.

“No one said a word until they drove away, only then did the numbness go,” she said. “I heard one woman say to another, ‘You should have taken the sewing machine out’, and the other said: ‘I couldn’t, the SS were in front of the door’.”

Another woman, Hildegarde, has a similar memory as a seven-year-old: SS men auctioning off for a pittance the possessions of deported Jewish neighbours – including a sewing machine.

“My mother sewed everything for us and I knew if I smashed open my piggy bank I could have afforded it,” she said. “I preferred to ask my mother first, though, and was very shocked by her reaction. She screamed ‘absolutely no way’, began crying and fell to her knees. Then my father tried to explain to me what I needed to know.”

As the rest of Europe celebrates Victory in Europe (VE) Day, Germans know the facts are indisputable: Germany started the war, and its industrialised killing murdered six million European Jews. But how best to remember that past responsibly is a dynamic process for each successive generation.

It wasn’t until the late 1960s that younger Germans challenged their parents and broke open the frozen, postwar silence about the nation’s war guilt. It took until 1985 to reach the current societal consensus on the second World War – and then only in West Germany.

In a landmark speech, then West German president Richard von Weizsäcker – himself the son of a leading Nazi-era official – acknowledged the ambivalence around May 8th, 1945, in Germany.

That date meant liberation for some and loss for others, he said. Some were relieved the air raids had ended, grateful to be alive and cautiously optimistic at the prospect of a new start under occupation. Others were distraught at the complete capitulation of the “fatherland”, bitter at their shattered illusions.

With four decades’ distance, he said, most Germans had come to accept May 8th, 1945, as a “day of liberation. It liberated all of us from the inhuman system of national socialist tyranny”.

Following other German heads of state, president Frank-Walter Steinmeier will on Friday add his own thoughts to this complicated legacy.

In January in Jerusalem, he became the first German head of state to speak at the Yad Vashem Holocaust memorial.

Steinmeier made a point of humanising the often dehumanised, abstracted Nazis – closing the mental gap that sometimes exists in German debates between the fascist “other” and the people who voted them into power in 1933.

“Germans abducted [Jews] ... Germans tried to dehumanise these people and reduce them to numbers, erase every memory of them in death camps,” he said. “The perpetrators were people. They were Germans. The murderers, the guards, the helpers’ helpers, the fellow-travellers: they were German.”

As the wartime allies remember their victory over the Nazis, and remember their war dead, conversations in Germany – 75 years on – are turning to how the Nazi regime came to power and stayed there for 12 years, thanks to the everyday conformity of ordinary people.