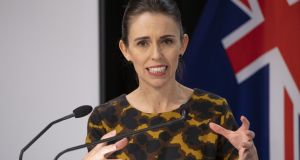 New Zealand prime minister Jacinda Ardern during the All of Government Covid-19 update and media conference at parliament on Thursday in Wellington. Photograph: Mark Mitchell/Pool/Getty Images

Hairdressers, bars and competitive sport could be back on the agenda for New Zealanders from next week as the prime minister, Jacinda Ardern, said the country was “halfway down Everest” in its fight against Covid-19.

New Zealand has been under strict lockdown restrictions for more than five weeks, but the low number of cases this week - zero for two consecutive days - means restrictions will soon be lifted.

Ms Ardern and her cabinet will make a decision on downgrading the country’s alert level from three to two on Monday, and by Wednesday, life could begin to look much more normal - and fun - for millions of cooped-up Kiwis.

The relaxation of restrictions, which would allow gatherings of up to 100 people, both indoors and outdoors, was greeted with jubilation across the country.

Public spaces such as playgrounds and libraries would be reopened, bars and restaurants would be able to accept patrons, and domestic travel and competitive sport allowed to resume, including the professional leagues, but there will be no stadium crowds for now. Most workers would be allowed to head back to the office, though Ms Ardern urged any who could stay home - or found it more productive - to do so.

Widespread social-distancing rules would continue to apply, including patrons being seated two metres apart in public spaces, strangers keeping their distance from one another, and hairdressers, barbers and beauticians being required to wear personal protective equipment.

New Zealanders have been living in tight “bubbles” for more than a month, only allowed to socialise with those in their own home.

Under the plans outlined by Ms Ardern on Thursday, they would be permitted to see friends, family and even online dates - so long as they keep a log of their movements, and did not participate in indoor or outdoor gatherings of any more than 100. Weddings, funerals and anniversary celebrations would also be permitted.

New Zealand’s progress at beating coronavirus through its elimination strategy has been somewhat controversial, with the country experiencing the toughest lockdown measures in the world and the economy predicted to contract by up to 8 per cent this year, the International Monetary Fund has said.

However, the measures appear to have been effective, with just 21 deaths - all older people with pre-existing health conditions - and global praise has been heaped on the small island nation of 5 million by the World Health Organisation, among others.

The detailed description of life under level two was greeted with jubilation by Kiwis, many of whom have been desperate for a haircut and a change of company and scene.

Jokes were made about the social-distancing restrictions for bars and clubs, with the prime minister saying such venues would be required to seat patrons and provide table service if they wanted to open.

Under level two, the “bar” area of a bar would be off-limits because it has been identified as a transmission hotspot for the virus. This was evidenced by a cluster of dozens of people who went drinking at a pub in Matamata on St Patrick’s day in March.

Speaking from the Beehive in Wellington, Ms Ardern said the fight against Covid-19 wasn’t won, but Kiwis should be proud of how quickly the country had got on top of the virus, compared with other countries. Less than 1,500 people have contracted the virus so far.

“Every alert level to fight Covid-19 is its own battle. When you win one, it doesn’t mean the war is over,” Ms Ardern said.

“There is a much higher level of individual responsibly required at level two to prevent the spread of the virus. Even though the economy will be significantly opened up we still need everyone to remain vigilant and continue to act like you and those around you have the virus.

“On Monday 11th May, we will make a decision on whether to move, taking into consideration the best data and advice we can, recognising the impact of restrictions, and ensuring we don’t put at risk all of the gains we have made.

“We need to balance the risk of the virus bouncing back against the strong desire to get the economy moving again.”

Although New Zealanders have been largely compliant with lockdown restrictions, police have still issued hundreds of warnings and fines to rule-breakers, the number of which sharply increased under level three.–Guardian