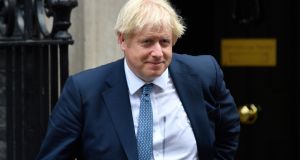 The Spectator political editor James Forsyth also quoted a source in Number 10 as saying there were “all sorts of things” the British government could do to scupper a delay. The source warned that if Mr Johnson’s plan “dies” in the next few days it would not be revived.

The source said that “Varadkar was keen on talking before the Benn Act when he thought that the choice would be ‘new deal or no deal’. Since the Benn Act passed he has gone very cold and in the last week the official channels and the backchannels have also gone cold.

“Varadkar has also gone back on his commitments – he said if we moved on manufactured goods then he would also move but instead he just attacked us publicly. It’s clear he wants to gamble on a second referendum and that he’s encouraging Barnier to stick to the line that the UK cannot leave the EU without leaving Northern Ireland behind.”

The source claimed that other EU countries were more open to compromise on Boris Johnson’s Brexit offer than Ireland.

“There are quite a few people in Paris and Berlin who would like to discuss our offer but Merkel and Macron won’t push Barnier unless Ireland says it wants to negotiate. Those who think Merkel will help us are deluded. As things stand, Dublin will do nothing, hoping we offer more, then at the end of this week they may say ‘OK, let’s do a Northern Ireland only backstop with a time limit’, which is what various players have been hinting at, then we’ll say No, and that will probably be the end.

“Varadkar thinks that either there will be a referendum or we win a majority but we will just put this offer back on the table so he thinks he can’t lose by refusing to compromise now. Given his assumptions, Varadkar’s behaviour is arguably rational but his assumptions are, I think, false.”

The source is quoted as saying that it will be made clear both privately and publicly that countries which oppose approving a delay to Brexit past October 31st will “go the front of the queue for future co-operation on things both within and outside EU competences”, adding: “Those who support delay will go to the bottom of the queue.”

Number 10 source predicts that Brexit talks will break down this week and blames Leo Varadkar, saying that he is refusing to negotiate despite indicating he would move if the UK moved on an all-Ireland zone for manufactured goods https://t.co/Yp92XCKPFu

The source also made it clear that the Tories would fight on a no-deal position when a general election is called. “To marginalise the Brexit Party, we will have to fight the election on the basis of ‘No more delays, get Brexit done immediately’,” the source is quoted as saying.

The source is also quoted as saying: “Those who pushed the Benn Act intended to sabotage a deal and they’ve probably succeeded. So the main effect of it will probably be to help us win an election by uniting the leave vote and then a no-deal Brexit. History is full of such ironies and tragedies.”

Mr Johnson is set to give up on Brexit deal talks with the EU after speaking to German chancellor Angela Merkel, according to another Downing Street source.

The agreement looked “essentially impossible not just now but ever”, reports the Guardian.

The prime minister appears to be heading for a more explicit no-deal strategy after speaking to Dr Merkel to discuss his Brexit proposals, which have been given a frosty reception by the EU.

An anonymous No 10 source briefed broadcast journalists, saying Dr Merkel “made clear a deal is overwhelmingly unlikely and she thinks the EU has a veto on us leaving the customs union". Downing Street did not deny the contents of the statement.

Ms Rudd told the Today programme: “It sounds angry and desperate. And the language that is used, I do not believe should be the language of a UK government. There’s a fair amount of speculation about where it came from.

“But since it hasn’t been denied by Number 10, and no young woman spad [special adviser], for instance, has been marched out of Downing Street, one can only assume it’s come from the centre, from the Prime Minister’s adviser.

“And the style of it seems to imply that.”

Asked if she thinks it was written by Mr Cummings, she said: “I think Dominic Cummings, yes, because otherwise it would have been heavily denied and heads would have rolled. So clearly it’s come from them, it’s in their style.

“It reveals that there doesn’t appear to be an actual plan at all. Instead, what they’re doing is angrily, apparently, begging the EU not to support a delay which will be required because of the position that Parliament has taken.

“And I urgently would ask the Prime Minister to take control of this and give us some clarity and some dignity and diplomacy on what is taking place.” – Agencies