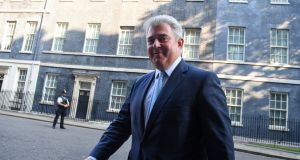 Northern Secretary Brandon Lewis: he told the Commons that the bill would break international law “in a very specific and limited way”. Photograph: Bloomberg

Last week MPs backed the bill which gives the British government power to override parts of the UK’s Brexit agreement. Northern Secretary Brandon Lewis has told the House of Commons that the plan would break international law “in a very specific and limited way”.

Representatives of civil society groups have said that the actions of the UK government are “jeopardising” the Belfast Agreement and the functioning of the devolved administration at Stormont.

The groups, which include the Human Rights Consortium, Equality Coalition and Unison, have described the actions of the government as “contravening” international law and “undermining” the provisions of the protocol in terms relating to the non-diminution of rights and equality protections.

“This bill fetters the ability of our devolved government to continue to take the progressive actions required to protect rights and standards in Northern Ireland if the UK government disagrees,” the groups said in a joint statement.

“We condemned these actions in the strongest possible terms, and demanded that the UK government withdraw the Internal Market Bill and unequivocally commit itself to the European Convention on Human Rights.”

The groups met UK government officials last week to share their concerns, and expressed disappointment that ministers did not attend the meeting.

“The protocol does not just deal with tariffs and trade, though avoidance of a hard land border is vital. Its full implementation is also fundamental to the protection of equality and human rights which form the bedrock of the Good Friday Agreement.

“This is well understood by the Irish Government, European Union and the allies of the peace process in the US Congress who have all expressed their concern at the threat to the agreement.

“The eyes of the international community are on the UK, and civil society will not stand idly by as our peace agreement is undermined by those who are meant to guarantee it.”

A UK government statement said: “The UK government’s top priority is to protect the Belfast/Good Friday Agreement and gains of the peace process. Our approach is at all times guided by these priorities.” – PA