Far right surging as Spaniards go to polls yet again 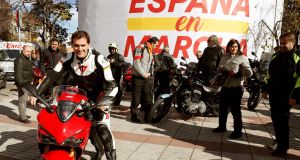 Spaniards will vote in a general election this Sunday amid a political stalemate, renewed turmoil in Catalonia and fears of a surge by the far right.

This election, the country’s fourth in four years, will attempt to break the deadlock that has been in place since an April vote proved inconclusive. The Socialists of Pedro Sánchez won that election but fell short of a majority in the 350-seat Congress, before failing to agree with the leftist Podemos party on the formation of a new government.

“We are not voting on November 10th in order to express political orientations, Spaniards have already done that [earlier this year],” Sánchez told El País. “What is at stake here is whether or not we have a government.”

Ahead of this Sunday’s election, the Socialists have been leading polls, although again they look unlikely to secure a majority. With Podemos apparently struggling to maintain its 42 seats and the Socialists’ relationship with that party at a low ebb, a leftist majority is looking less feasible than in April.

However, a new party has emerged on the left since then, which could either boost Sánchez’s chances of forming a new administration or hinder them. Íñigo Errejón, the former deputy leader of Podemos, says his Más País party will help unblock the impasse and mobilise voters on the left who have been disenchanted by the bickering between their parties in recent months.

“Leftist parties have always won when turnout is high – when the abstention rate rises, the forces on the left are the ones that suffer,” Errejón said. “This is not a new election, it is a repeat election which is due to the failure [of parties] to reach an agreement . . . We will vote in favour of a leftist government.”

That commitment to supporting Sánchez in a post-election investiture vote makes Errejón an outlier. His party, which is polling in single figures, has fended off claims that it will fragment the leftist vote by pointing out that it is only running in provinces where it is unlikely to undermine the Socialists and Podemos.

Despite efforts by the parties on the left to focus on social issues, it is the territorial crisis surrounding Catalonia that has monopolised recent political debate.

The supreme court’s jailing of nine Catalan leaders last month for sedition, for their role in a failed attempt to break away from Spain in 2017, has triggered a wave of unrest in the region. In the immediate aftermath of the verdict, there were violent scenes on the streets of Barcelona and other cities as pro-independence protesters clashed with police. Since then, the situation has calmed somewhat, although relations between Madrid and the pro-independence Catalan government have deteriorated.

The political right has repeatedly accused Sánchez of being reluctant to take a tough line on Catalonia because he required the support of pro-independence parties in parliament last year in order to win an investiture vote.

“The king and Princess Leonor can’t go to Catalonia, as if it were a zone of civil confrontation,” said Pablo Casado, leader of the conservative Popular Party (PP), earlier this week, as he urged Sánchez to “restore order” in the region. The royals did in fact visit Barcelona for an awards ceremony, but a large police presence was required to control protests against them.

The PP and the Ciudadanos party have called for direct rule to be introduced in the region, a measure that was briefly in place in 2017 and 2018 and which Sánchez has ruled out for the moment. However, his government has refused to engage in talks with the pro-independence Catalan president, Quim Torra, unless he changes tack.

Political scientist Pablo Simón said Sánchez was seeking to “avoid any accusations that he is in cahoots with the independence movement, above all when there is a separatist faction that [has been] burning Barcelona”.  That is why, Simón, said, the prime minister was seeking to convey a message of “stability, confidence, firmness and toughness”.

Police reinforcements have been deployed to the northeastern region to ensure activists do not disrupt voting on Sunday.

On the right, the PP appears set to recover somewhat after losing over half of its seats in April. However, polls suggest that the biggest beneficiary of the Catalan turmoil is the far-right Vox, which has called for an uncompromising policy against separatism and for the recentralisation of Spain. There is also speculation that the government’s recent exhumation of the remains of dictator Francisco Franco from his mausoleum has mobilised voters on the far right who were angered by the move.

Having won 24 seats in April, many polls show Vox close to doubling that at the expense of Ciudadanos, which looks set to suffer a disastrous result on Sunday. In recent months, Vox has been the junior partner in helping the PP and Ciudadanos form local governments in places such as Madrid and Andalucía. Yet, if polling projections are borne out, Vox could be poised to become Spain’s third-biggest party.

It is quite possible that neither the parties on the left nor those on the right will be in a position to form a majority after Sunday. In that case, two further alternatives would present themselves: an unprecedented grand coalition between the Socialists and the PP, or yet another election.