Amid anniversary tourism, a quiet remembrance of Berlin Wall dead

In a tiny chapel on the ‘death strip’, Berliners will mark 30 years since the wall was toppled 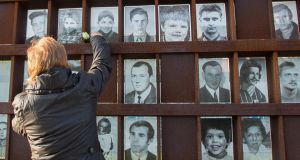 As the bell tolls mournfully at noon, six people sit inside the oval chapel, deep in thought and prayer. They are here today, as they are at noon every day, to remember the victims of the Berlin Wall.

On Saturday this chapel will host Germany’s political leaders, who will mark the day, 30 years previously, when the wall was toppled after 28 years.

For millions, November 9th, 1989 will forever be a day of joy and relief – a peaceful revolution. But at least 140 died before then and today local man Rainer Böhme has volunteered to recall one of the wall’s youngest victims.

On October 30th, 1972, Cengaver Katranci, an eight-year-old boy from a Turkish immigrant family living in West Berlin, was feeding swans on the River Spree.

At about 1pm friends saw him lose his balance and fall into the river, then the sectoral divide between East and West Berlin. Technically, the waters belonged to the territory of the eastern German Democratic Republic (GDR) and locals knew unauthorised entry could be lethal, even in a life-or-death situation. Perhaps that’s why a local fisherman who saw the boy struggle and go under was afraid to intervene.

West Berlin water police scrambled to the scene within a few minutes but were ordered by East Berlin border guards to hold back. More than two hours later, when a GDR boat and diver reached the scene, all that was left to do was retrieve the boy’s body. But the tragedy didn’t end there.

“The diver didn’t swim the two metres to the West Berlin side but instead swam back to the boat and the East German border guards,” reads Reiner Böhme in a calm voice. “Any move by the diver with the boy to the western shore could have been viewed by the border guards as an attempt to flee.”

The body was taken to East Berlin and his grieving mother had to apply for a travel permit to retrieve her dead son.

Sitting in the Reconciliation Chapel, the enormity of the Berlin Wall comes crashing in again. A young life lost, a family destroyed, inhumane bureaucracy. Those who gather here each day to remember the wall and its victims don’t like the round anniversaries. None of them will attend Saturday’s ceremony at the Brandenburg Gate, with Beethoven music, fireworks and lasers.

For Böhme, coming to the chapel is what he calls a Herzensbedürfnis, a need of the heart.

“Sometimes we have 10 or 15 people here with us, or up to 90. Sometimes, like today, it’s just six,” says Böhme, who grew up in East Germany. “But it doesn’t matter once these people are not forgotten.”

The understated Reconciliation Chapel is one of Berlin’s most extraordinary buildings. Architects Rudolf Reitermann and Peter Sassenroth created a simple and harmonious structure of two concentric ovals: an inner oval of pressed clay, housing the chapel, surrounded by an outer oval of vertical wooden slats.

The Lutheran chapel opened its doors here in 2000 on what was once the wall’s death strip between East and West Berlin. Once this site was occupied by the turreted splendour of the Church of Reconciliation.

It was built in 1894 but, after 1961, found itself isolated by the new Cold War division. For 24 years it sat empty, out of bounds for parishioners on both sides of the wall. Then, in 1985, East Berlin authorities decided the church was a security risk and blew it up.

There’s a dignity to the remembrance and reflection here that is at odds with the official 30th Berlin Wall tourism event outside, trapped between ritualised memorialising and commercial concerns.

These tensions between shallow reaction and deeper reflection are what prompted Berlin-based Irish photographer Ethna O’Regan in 2013 to begin a personal journey around the 155km trail of the Berlin Wall with her camera.

Her just-published photo book, Beyond Reach, is a ghostly meditation on the wall victims she encountered through memorials along her path. But, for the most part, her photographs are of the empty countryside that remains, with few clues of what was once here.

For O’Regan, German division and the Berlin Wall remain an everyday tragedy. Remembering is not a simple ritual for a round anniversary such as Saturday’s, but a dynamic process for the day after as well.

“People can see the Berlin Wall as an old topic, but the landscape is still there, still changing and will continue to change,” she said. “I was trying to find traces of the psychological, what it might have been like to live here, feeling trapped, and to die here.”