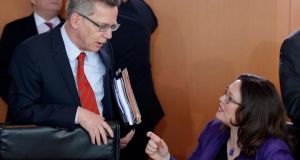 A 133-page study found that Germany was a massive beneficiary of the EU’s free movement of labour, and that the overwhelming majority of citizens of other EU countries living in Germany have work – some 1.4 million – and made a considerable financial contribution.

The report comes almost four months after Chancellor Angela Merkel’s junior coalition partner, the Bavarian Christian Social Union (CSU), vowed to “kick out” welfare cheats. Their vow, as Germany opened its labour market to Bulgaria and Romania on January 1st, came just ahead of regional elections in Bavaria. CSU critics accused the party of chasing hard-right voters with xenophobic stereotypes, and of inflating limited regional problems – largely with Roma and other minorities in some cities – into a national crisis.


Child allowance
A commission established to examine the matter found just 5 per cent of welfare recipients in Germany were EU citizens. Among Romanian and Bulgarian citizens the figure was 7 per cent, half the average jobless rate among non-German citizens in the country. Non-German EU citizens accounted for 4.6 per cent of Germany’s 14.4 million child allowance payments.

However the report noted that child benefit was often the only source of income for migrants, even if the children were not in Germany, and proposed tightening welfare access to non-German citizens.

Another proposal would decrease, to between three and six months, the length of time job seekers could remain in the country without work. Another proposal would impose re- entry bans on people deported for welfare fraud. Authorities promised to tighten up child provisions as well as rules for issuing trading licences to EU citizens. Having one’s own business opens a door to German benefits and interior minister Thomas de Maizière said he wanted to end the phenomenon of new arrivals in Germany, unable to speak the language, submitting word-perfect applications for a trading licence and later, welfare payments. He also vowed to tackle the widespread “kerb-crawling” in major cities, where German companies pick up day labourers.

“It all seems to be black-market work, paid off the books, and the firms involved are not Bulgarian or Romanian but German,” said Mr de Maizière.

With migration from Romania and Bulgaria set to double this year, he promised €200 million in additional assistance to individual cities, mainly in western Germany, already struggling to cope with an influx of eastern European migrants.

“The number of migrants from Bulgaria and Romania, and the often related social problems are . . . a cause for concern at regional level,” said Mr de Maizière. “It’s right to act now before this becomes a large problem for Germany as a whole.”