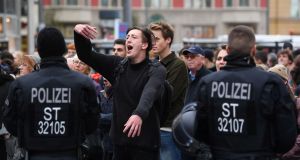 People protest against a far-right speaker in Halle two days after an attack targeting a Turkish restaurant after an attempt at a synagogue. Photograph: Hendrik Schmidt

A 27-year-old German man arrested after Wednesday’s attack on a synagogue, after which two people died, has admitted he was motivated by far-right, anti-Semitic beliefs.

After hours of interrogation, prosecutors said Stephan Balliet had admitted attempting to gain access to a synagogue in Halle, eastern Germany, and later shooting two people – a 40-year-old woman and 20-year-old man – nearby.

Balliet made his confession to the judge at a remand hearing in Germany’s federal court of justice on Thursday evening. Now in pre-trial detention, he faces two murder charges as well as seven counts of attempted murder.

“He gave an extensive confession,” a spokesman for the federal prosecutor’s office said. “He confirmed far-right and anti-Semitic motives.”

The gunman’s lawyer said it was “senseless” to deny anything and that his client was “eloquent but isolated”, spending a lot of time online.

“In his world view he made others responsible for his own misery,” said Hans-Dieter Weber, “and that was the trigger for his actions.”

Some 51 people were inside the Halle synagogue at noon on Wednesday marking Yom Kippur, the holiest day in Judaism. A massacre was avoided only by chance: a robust door and several jammed guns.

Investigators say Balliet learned to shoot during military training a decade ago. In a rented car he had many more rounds of ammunition and 4kg of explosives.

It was 15 minutes before police responded to panicked phone calls inside the synagogue, where women, children and elderly worshippers hid and men barricaded the main door.

That has prompted an investigation into the tardy police response and why, unlike standard procedure in other cities, no police guard was on hand outside the Halle building.

German defence minister Annegret Kramp-Karrenbauer called for stronger security laws, telling Berlin’s Tagesspiegel newspaper on Friday: “Our country and its basic order are being attacked from within.”

German investigators say the Halle gunman emulated closely the Norwegian man behind the 2011 Utoya attack that killed 69 people and the March attack on two New Zealand mosques that left 51 dead.

The German attack was far less professional but still ended with two fatalities and two more seriously injured. More than 2,000 people have reportedly viewed the gunman’s own 35-minute live stream of the attack in which he comments on his failures and killings.

After the shock of the Halle attack, some German media outlets contrasted the reaction towards immigrant perpetrators of anti-Semitic violence with far-right attacks – including a decade-long series of killings – by German perpetrators.

“When immigrants from the Middle East attack kippa-wearing men . . . it is rightly criticised,” noted the centre-left Süddeutsche Zeitung. “The anti-Jewish carry-on of Germans . . . doesn’t trigger anything like the same reaction.”

Also attracting criticism on Friday was the Bild tabloid. While the New Zealand mosque attack prompted a media blackout around the gunman, Bild has secured a copy of the Halle live stream and has used extensive extracts in its online reporting.

When its editor wrote a lead article about how such perpetrators seek public confirmation through their acts, one reader hit back: “And then you put a huge picture of his face on your start page?”

On Friday afternoon Germany’s federal criminal police warned that distributing material relating to the attack could lead to prosecution under Germany’s criminal code. This provides an exception for reporting of such events as the Halle attack.