At least 20 people are reported to have been killed after a bridge collapsed in the north-western Italian city of Genoa during a storm. Video: Reuters 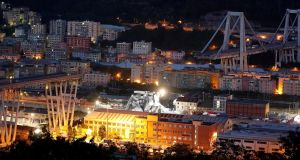 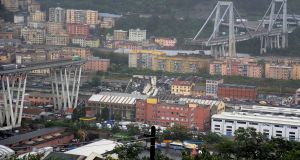 The collapsed Morandi Bridge is seen in the Italian port city of Genoa. Photograph: Reuters 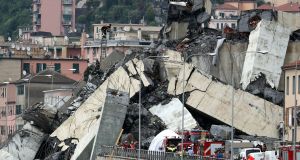 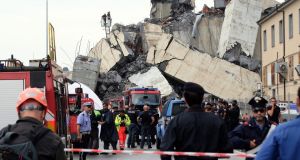 Rescuers are at work amid the rubble of a section of a giant motorway bridge that collapsed in Genoa. Photograph: Andrea Leoni/AFP/Getty Images 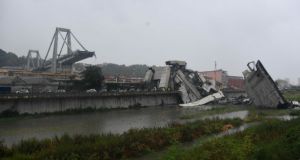 A large section of the Morandi viaduct which collapsed in Genoa. Photograph: EPA 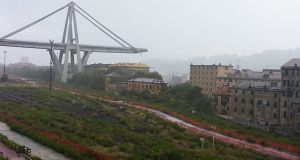 A handout picture obtained from the Facebook account of Paola Pirrera shows a collapsed section of a viaduct on the A10 motorway in Genoa. Photograph: Paola Pirrera/AFP 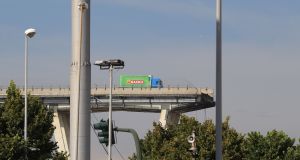 A lorry sits on the Morandi Bridge after a section of it collapsed in Genoa. Photograph: Valery Hache/AFP/Getty Images 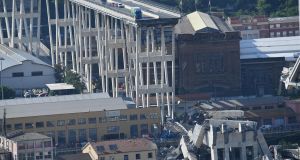 A view of a collapsed section of a bridge in Genoa, Italy. Photograph: Luca Zennaro/EPA

At least 35 people were killed when a bridge collapsed in the Italian port city of Genoa, police said on Wednesday after firemen worked through the night looking for any survivors buried under the rubble.

"The latest official number is 35 but we can't rule out it could rise further," a spokeswoman for the police in Genoa said.

A 50m (160-foot) high section of the Morandi bridge, including a tower that anchored several stays, crashed down with as many as 35 vehicles driving on it on Tuesday. Huge slabs of reinforced concrete plunged onto two warehouses, train tracks and a riverbed.

More than 400 people were evacuated from 11 buildings located near or below the still-standing of the bridge, the city said. The collapse, at 11.30am local time (10.30am Irish time) appeared not to have killed anyone under the road, but only those who were driving on it, the civil protection agency said earlier.

Firefighters still heard voices from under the rubble several hours after the incident, fire official Bruno Frattasi told state broadcaster RAI, saying that seven survivors had been pulled out by early Tuesday evening.

“We are still trying to extract survivors from the rubble,” Genoa police official Alessandra Bucci said. “We hope to find more people alive.”

Within hours of the disaster on a morning of torrential rain, the anti-establishment government that took office in June said the bridge collapse showed Italy needed to spend more to improve its dilapidated infrastructure, ignoring EU budget constraints if necessary.

“We should ask ourselves whether respecting these [budget] limits is more important than the safety of Italian citizens. Obviously for me it is not,” said deputy prime minister Matteo Salvini, who leads the right-wing League, which governs with the populist Five Star Movement.

Mr Salvini also said he wanted the “names and surnames of those to blame because a tragedy like this in 2018 is not acceptable”.

“They will have to pay, pay for everything, and pay a lot,” he said.

Helicopter footage showed trucks and cars stranded on either side of the 80m long collapsed section of the Morandi Bridge, built on the A10 toll motorway in the late 1960s. One truck was shown just metres away from the broken end of what locals call the “Brooklyn Bridge”.

Motorist Alessandro Megna told RAI state radio he had been in a traffic jam below the bridge and seen the collapse. “Suddenly the bridge came down with everything it was carrying. It was really an apocalyptic scene, I couldn’t believe my eyes,” he said.

Luigi D’Angelo, an official for the civil protection agency, said there were 30 cars and between five to 10 trucks on the road when the middle section came down. The agency said 16 people had been hospitalised, including 10 in critical condition.

Some 300 firefighters were working in the wreckage, using sniffer dogs to try to locate survivors.

“People living in Genoa use this bridge twice a day,” deputy transport minister Edoardo Rixi, who is from the city, said. “We can’t live with infrastructures built in the 1950s and 1960s.”

Transport minister Danilo Toninelli told Italian state television the disaster pointed to a lack of maintenance, and echoing Mr Salvini, he said that “those responsible will have to pay”.

Autostrade, a unit of infrastructure group Atlantia that is controlled by the Benetton family, manages the section of the toll highway that collapsed.

Stefano Marigliani, the Autostrade official responsible for the Genoa area, said: “The collapse was unexpected and unpredictable. The bridge was constantly monitored and supervised well beyond what the law required.”

He said there was “no reason to consider the bridge was dangerous.”

Autostrade said it would work with investigators to discover the cause of the disaster, and that it was already assessing how to rebuild the bridge.

The design of the elevated road had been criticised in the past.

In a 2016 interview posted online, Antonio Brencich, a professor specialising in reinforced concrete construction at the University of Genoa, said “this bridge is usually characterised as a masterpiece of engineering, but in reality it is a failure of engineering”.

Mr Brencich did not say at the time that it was in danger of collapsing, but that it required continuous improvements and maintenance and that eventually it would have to be torn down and replaced.

Restructuring work was carried out in 2016 on the 1.2km bridge, first completed in 1967. The motorway is a major artery to the Italian Riviera and to France’s southern coast.

Autostrade said work to shore up the road foundation was being carried out at the time of the collapse.

The government has pledged to increase public investments and lobby the European Commission to have the extra spending excluded from EU deficit calculations.

“The tragic facts in Genoa remind us of the public investments that we so badly need,” said Claudio Borghi, the League’s economy spokesman.

Mr Conte, the prime minister, visited the rescue teams in Genoa in the evening, saying afterwards that the country’s infrastructure should be more closely monitored. Defence minister Elisabetta Trenta said the army was ready to offer manpower and vehicles to help with the rescue operations.

Atlantia shares closed down more than 5 per cent.

The Irish Embassy in Rome was not aware of any Irish citizens involved in the incident.

Minister for Foreign Affairs Simon Coveneny has expressed his condolences over the incident.

“I want to express my condolences to the Italian government and people, and especially to the families of those killed and injured in today’s horrific bridge collapse. My thoughts and prayers are with all those grieving at this very difficult time.” – Reuters