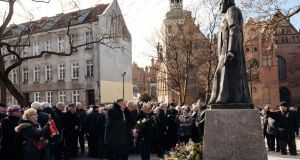 For the second time in a month, the statue of a polarising Polish priest has vanished from the streetscape of Gdansk.

Councillors in the northern Baltic port city voted to remove – this time for good – a statue of Henryk Jankowski, the former chaplain of the Solidarity union movement that toppled communism.

Even before his death in 2010, Fr Jankowski was a divisive figure, known for increasingly virulent anti-Semitic views. In the years since, his reputation has come under sustained attack by a growing number of adults who accuse him of abusing them as children.

The row of his legacy and statue has morphed into the latest act in a long-running cultural drama between liberal and conservative forces in Poland that, in January, claimed the life of Gdansk mayor Pawel Adamowicz.

He was stabbed fatally at a public concert by a mentally unstable man, an attack his supporters blamed on hate speech from conservatives and government-controlled media.

The fatal stabbing stirred up emotions already running high, with the statue becoming a symbol of overlap between Polish Catholicism and nationalism.

In December, following new reports alleging the priest was a serial child abuser, Gdansk locals poured red paint on the statue. Jankowski loyalists cleared the paint from the statue and its pedestal, then three local men came one night last month and posted online a video of them toppling the statue. Supporters restored the statue immediately and have accused Polish liberals of a witch hunt – against traditional Catholic values and a man who can no longer defend himself. Though they have complied with the council vote to remove from its public site the statue erected in 2012, they are suing for defamation journalists who wrote stories alleging abuse.

“This monument disappears now but it will be back, because Fr Jankowski’s reputation deserves to be cleansed,” said Karol Guzikiewicz, Solidarity’s deputy leader.

However Solidarity legend Lech Walesa has been more equivocal, distancing himself both from the row over the statue and its subject, insisting it is “up to God to judge” the controversial priest.

The vote to remove the statue was one of the first acts of Gdansk’s new mayor, Aleksandra Dulkiewicz, former deputy to the murdered mayor. On March 4th she won an election to succeed him by a landslide 82 per cent.

Jankowski supporters insisted the priest’s former church will “remain shut” to the new mayor and her supporters who, they said, have “trampled” on the memory of Solidarity and its former chaplain.

“The new mayor has divided Gdansk, divided Catholics and divided us all,” he said. Asked if he had any sympathy for alleged victims of Jankowski’s years as a child abuser, Mr Guzikiewicz said the late priest was a “friend to me, an authority”.

“A touch can be father-like and not abusive,” he said. “I didn’t have a father, so I perceived the priest’s touch as fatherly care. This is the leftists’ attack against the church but it is 2,000 years old and will overcome this too.”