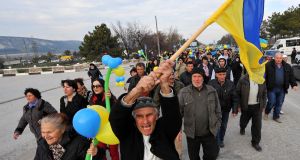 Crimean Tatar community with the Ukrainian flag in Bakhchisarai, south of Simferopol, on March 14th, 2014, two days before a referendum in Crimea to join Russia. Photograph: Viktor Drachev/AFP/Getty Images

Eleonora Bekirova has not seen or spoken to her father for 81 days, since he was arrested at a checkpoint between the Ukrainian mainland and Kremlin-controlled Crimea.

Russia accuses Edem Bekirov of secretly transporting more than 10 kilos of explosives and almost 200 bullets into Crimea, where he is now held in a small, shared cell with an open toilet and 24-hour video surveillance.

But Bekirov makes an unlikely arms smuggler: the 58-year-old agronomist suffers from diabetes, wears a prosthetic lower leg and uses crutches, and was days away from a second major heart operation when he was detained in December.

“The main reason they arrested him is that he is a Crimean Tatar,” Bekirova says of her father, who is not allowed visits or calls from relatives. “It’s possible that his arrest had something to do with my mother being a member of the Mejlis [the Crimean Tatar assembly] or because I work for the Crimean Tatar television station ATR, which tells people what’s going on in Crimea.

“But above all I think Russia wants to use him as an example to scare the entire Crimean Tatar people – to show that even someone who has had a leg amputated and has diabetes and serious heart problems can be arrested and held in such conditions.”

Ukraine lists Bekirov as one of more than 70 of its citizens who are political prisoners in Russian-run jails.

About half are members of a Crimean Tatar community that fiercely opposes Russia’s annexation of their homeland, which began five years ago when “little green men” seized state buildings and strategic sites across the Black Sea peninsula.

These Russian soldiers without insignia established de facto Kremlin control over Crimea, and prepared it for a referendum on March 16th, 2014, which Moscow claims legitimised its occupation of a region twice the size of Northern Ireland.

Crimea’s ethnic Russian majority welcomed the Kremlin’s response to Ukraine’s pro-western Maidan revolution, but the annexation was rejected internationally and by many of the peninsula’s ethnic Ukrainians and Crimean Tatars, who together made up more than a quarter of its two million people.

Antipathy towards Moscow was particularly strong among Crimean Tatars, Muslims who returned to their homeland in the 1980s and 1990s after being deported en masse to remote parts of the Soviet Union by Joseph Stalin in 1944.

Their fear of Kremlin rule quickly proved to be well-founded.

In March 2014, Reshat Ametov (39) was abducted while staging a one-man protest against the annexation in the centre of the Crimean capital, Simferopol. His body was found bearing signs of torture, but his killers have not been caught.

Several other opponents of Russian rule have since disappeared without trace in Crimea, and dozens have been arrested amid a police campaign of raids, surveillance and harassment.

In its 2018 report on Crimea, the office of the UN’s high commissioner for human rights urged Russia to “end discriminatory practices and human-rights violations and abuses, including torture, ill treatment, enforced disappearances, arbitrary arrests and detention”.

The report also noted that Crimean Tatars were “disproportionately affected by police raids and prosecuted under terrorism and extremism-related offences in proceedings falling short of human rights standards . . . indicating a pattern that suggests intent in targeting the group”.

Russia denies such allegations, but sent a clear message to Crimean Tatars by banning their Mejlis council, barring their political leaders from Crimea and revoking the licence of their ATR television channel – all of which now work from “exile” in Kiev.

“The repressive machine unleashed against Crimean Tatars is only getting more powerful,” says Lilia Hemedzhy, one of the community’s leading lawyers.

“It particularly targets people on religious grounds and those involved in legal and human rights work, because they are like a flagship for peaceful resistance in Crimea and they make a big contribution to the non-violent struggle of our people.”

Crimean Tatar lawyer Emil Kurbedinov – who was honoured in 2017 by Dublin-based rights group Front Line Defenders – was jailed for five days in December for a Facebook repost from 2013, which allegedly included symbols of Muslim group Hizb-ut Tahrir, which is banned as a terrorist organisation in Russia but not in Ukraine.

Russian prosecutors also gave him an official warning to avoid “extremist activity” and issued the same to Hemedzhy and colleagues at Crimean Solidarity, an NGO that is under mounting pressure from Moscow’s security services.

“I asked what constituted my ‘extremist activity’ and prosecutors said the warning was based on information they could not reveal. So no one can tell me how to avoid breaking the law that is now in force in Crimea,” Hemedzhy said after speaking at the Organisation for Security and Co-operation in Europe in Vienna.

She is now defending Server Mustafayev, an activist and co-ordinator of Crimean Solidarity, who was arrested last May over alleged links to Hizb-ut Tahrir. He shares a cell with Bekirov, whom relatives say is not receiving the medical care or food he needs as a diabetic with severe heart trouble and an open wound on the stump of his right leg.

The EU and US are urging Russia to release him, but it has not heeded similar appeals. Last year, Moscow was unmoved by the 145-day hunger strike of Oleh Sentsov, a Crimean film director it jailed in 2014 on spurious terrorism changes; he was awarded the European Parliament’s prestigious Sakharov Prize for Freedom of Thought last October, but is still held in a prison in the Russian Arctic.

Bekirova says she and her mother are barred from Crimea, while Hemedzhy never knows what she will face when she returns home from trips outside the peninsula. “When they find out I was here in Vienna I could get another official warning or some kind of informal threats,” Hemedzhy, a mother of four, said this week.

“But the way I see it, we are all in the crosshairs. Our people’s attitude is to insist on our honour and dignity and to fight for our right to live peacefully in our homeland and raise our children in the traditions that our ancestors gave us. That’s probably the strongest motivating factor that inspires us all.”