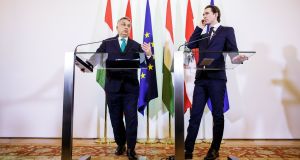 Austrian chancellor Sebastian Kurz has praised visiting Hungarian prime minister Viktor Orban’s tough stance on immigration, and said Vienna wants to help heal a rift between some eastern and western states over the future of the European Union.

Opponents criticised Mr Kurz for meeting Mr Orban, whose government is being sued by the EU over rule-of-law issues, and who was also due to meet far-right Freedom Party leader and vice chancellor Heinz-Christian Strache.

“We need to stop illegal migration to ensure security in the EU . . . it’s in all of our interests that we work together,” Mr Kurz said.

“Hungary is an important neighbour for us. We are grateful for co-operation on protection of the EU’s external borders and the closure of the west Balkan route,” he added later on Twitter, recalling how Mr Orban built border fences in 2015 after about one million refugees and migrants trekked into Europe from the Middle East.

Mr Orban said migration was the “greatest threat today to a bright future for central Europe” and insisted that protection of Europe’s outer frontiers was vital if the EU’s Schengen Area of “borderless” travel was to survive.

The EU is taking Hungary, Poland and the Czech Republic to court over their refusal to accept quotas of refugees.

Brussels is also suing Hungary for tightening government control over civil society groups and over education reform that could force the closure of Budapest’s Central European University, a bastion of liberal values in the region.

“Above all, our common goals are to stop illegal migration and strengthen subsidiarity in the EU. Austria can and wants to make a contribution to reinforce cohesion in the EU and reduce tension,” Mr Kurz said.

Vienna could play a “bridging role” between east and west, he added.