Scheme provides up to €5,000 a week to businesses forced to close due to Level 5 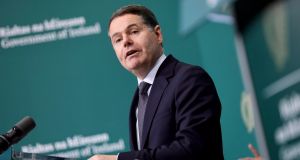 The Government’s new business support scheme will cost the exchequer €80 million a week during the Level 5 Covid-19 restrictions, the Department of Finance has estimated.

With the restrictions expected to remain in place for six weeks, up to December 1st, this will add up to a total of €480 million.

The Covid Restrictions Subsidy Scheme announced on budget day provides for grants of up to €5,000 a week to businesses that have been forced to close or operate at a significantly curtailed level because of the current restrictions.

In order to qualify, a business must have lost 75 per cent or more of its turnover relative to the same period in 2019.

There are no figures yet on how many businesses have availed of the scheme.

In the Finance Bill following the budget, the Government tweaked the eligibility criteria for participating business, reducing the revenue-loss threshold from 80 to 75 per cent, potentially bringing in a greater number of impacted businesses.

The relief, which will run from October 13th to March 31st, is primarily aimed at businesses in the hard-hit consumer-facing sectors of the economy, such as retail and hospitality.

It will operate as a cash payment equal to 10 per cent of the average weekly value of the 2019 business’s turnover up to €20,000 and 5 per cent thereafter, subject to a maximum weekly payment of €5,000.

Budget documents show it has an estimated cost of €40 million for every week at Level 3, with any spending on the scheme next year set to be funded by the State’s €3.4 billion recovery fund.

The scheme only applies when Level 3 restrictions or higher are in place, and it can be operated alongside other State supports, such as the Employment Wage Subsidy Scheme

Last week Minister for Finance Paschal Donohoe confirmed the reduced rate of VAT for the hospitality and tourism sector, which came into effect on Sunday, would cost the exchequer more than €400 million in lost revenue.

Up to 15,000 businesses are expected to benefit from the reduced 9 per cent rate.