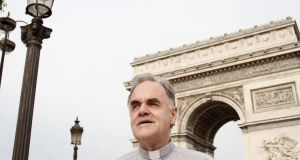 When Father Aidan Troy heard Notre Dame cathedral was on fire, he did the only thing he could.

“I went down to Notre Dame, not to do anything, but just to pay homage,” he said.

“There were hundreds if not thousands down by the River Seine.”

He stood until after midnight, watching the 12th century cathedral burn. “There was a sombre mood, and a mood of reverence, and a tremendous sense that we were seeing something unfold before our eyes that nobody could have imagined.”

The shock and sorrow were palpable. “It was one of those moments that just touch your soul,” he said.

Fr Aidan Troy, originally from Bray, Co Wicklow, knows Notre Dame well. The parish priest at St Joseph’s in Paris, the city’s English-speaking parish, he goes to the cathedral once a week for evening prayer and for Confession.

“My parish church was burnt down last night,” he said.

“That’s my local church. Outside of my own church, there is no other church in Paris that I would have used as much as Notre Dame. It’s an active, working parish as well as an iconic building.”

He is relieved that much has been rescued. “There are things which are particularly poignant this week, the Crown of Thorns, the relic, which was got out.

“The blessed Sacrament came out, and the big crucifix above the altar has not gone, so we have wonderful things to rebuild with.”

Fr Troy has lived through other tragedies – witnessing the Holy Cross dispute in Ardoyne in Belfast in 2001, and the aftermath of the Paris attacks in 2015 in which 130 people were killed.

“I remember the night of 2015, in the Bataclan, and I remember walking over towards the Champs-Élysées and it was eerie, it was so, so quiet, and I remember how I felt, that this was absolutely awful.

“You get those moments – I remember moments like that in Belfast – those moments that just touch your soul, when terrible things happen.

“Thank God, this seems to have been an accident, and talking to a few people this morning I think the mood is changing towards a little bit more optimism.”

For Fr Troy, the solidarity displayed within France and around the world has been “one of the few good things”.

“When President Macron said last night, we will rebuild Notre Dame, standing beside him, almost unnoticed I thought, was the Archbishop of Paris in a grey shirt with just a collar and I thought, there are church and state standing shoulder to shoulder.

Such is the significance of Notre Dame, says Fr Troy.

“No matter what your denomination is – or whether it’s no denomination – there is an attachment to Notre Dame that goes beyond monetary value.

“It’s about needing to know we have a spirit, even if it’s not always a religious spirit.

“This isn’t just a Catholic story, it’s a story about humanity.”

As the rebuilding starts, he said, “honestly, I think it’s going to be a bit like Ground Zero. I think many people are going to go to Notre Dame now as a shrine as it’s being rebuilt. I think it will have even more visitors come to look at it and just to pay homage to something that we’ve lost.

“I may not live to see it, but I know it will come back.

“It’s a bit like the story of this week, there will be a resurrection, I’ve absolutely no doubt about that.