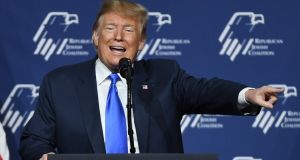 President Donald Trump at the weekend again declared that the United States was “full” and called its asylum system “a scam”, tying his push to close the country’s borders to immigrants entering the country illegally and asylum seekers to an entreaty for Jewish voters to support his re-election campaign.

He was met with raucous applause and cheers at the Republican Jewish Coalition’s annual leadership meeting in Las Vegas, underscoring how many conservative Jewish voters, alarmed by rising threats of anti-Semitism and energised by his pro-Israel policies, have embraced a president with a history of trafficking in anti-Semitic tropes including remarks that he has made before the coalition.

Fresh from a visit on Friday to a California border town, the president doubled down on his attacks on migrants seeking asylum at the border. The administration has recently toughened its policy for accepting asylum seekers, with stories of fleeing violence and corruption no longer meeting the standard for entry.

“The asylum programme is a scam,” he said, describing people “who look like they should be fighting for the UFC”, with large muscles and face tattoos. “Some of the roughest people you’ve ever seen.”

Mr Trump has sought to paint himself as a chief supporter of Israel, trumpeting the fulfilment of his promise to move the US embassy to Jerusalem and his decision to recognise Israel’s authority over the long-contested Golan Heights.

Vice-president Mike Pence, in a speech later on Saturday, called the president “the greatest friend of the Jewish people ever to sit in the Oval Office”.

A few protesters were escorted from the arena early on in the speech, chanting “Jews are here to say: Occupation is a plague,” according to IfNotNow, a Jewish organisation that issued a statement afterward.

Logan Bayroff, spokesman for J Street, the liberal Jewish organisation, said the president’s remarks about immigrants and minorities were “extremely discordant and extremely disgusting to the majority of Jewish people”.

But the crowd of supporters in the ballroom at the Venetian hotel and casino were enthusiastic as the president delivered a cornucopia of boasts, complaints and exaggerations typical of his campaign rallies: efforts to overhaul trade deals with Mexico and China, and his pledge to build a border wall. Cheers of “four more years” rang out after Mr Trump left. – New York Times Service