‘The maintenance of many of these buildings is a real challenge,’ says Archbishop 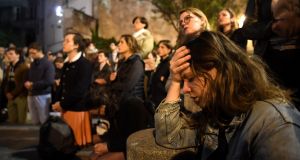 The Catholic Archbishop of Dublin Diarmuid Martin has expressed concern that some Irish churches could face the same fate as Notre Dame as he vowed to raise money for the restoration of the Paris cathedral.

“This is the thing that worries me in our churches. We have many old churches here, there is a lot of wood in our churches, there are serious problems of fire risks,” he said.

“We constantly have the fire authorities come and look at our churches. There are lots of, not only important artworks but, if you go around small, local churches, there are things that are important in the history of a locality and there is always a danger they could be damaged or stolen. The maintenance of many of these buildings is a real challenge.

“What struck me in all of this, is to see how all of France - Christians, Jews, Muslims, people of no faith - are mourning the loss of this building,” the Archbishop said.

“This coming together of different views in secular society and respect for each other and what that church meant, it is an interesting sign of where we should be going in the future, not just in France but maybe at home here.”

Like every other cathedral around the world, Notre Dame would have been preparing for Easter, he said.

“I think we may have to find ways in which Irish people have the opportunity to make a contribution, some type of collection.”

Parisians have been gathering around the gutted Notre Dame cathedral “like an open air wake”, said Monsignor High Connolly, chaplain of the Irish College in the French capital.

“There were people praying, people singing, but largely there was a sense of disbelief and sadness really, and a sort of muted resignation as they saw the flames come through that famous roof,” he said.

Reports that relics and artworks were saved from inside the church remain “largely unconfirmed”, he said, adding that the “big tragedy” is the devastation to the huge roofing frame and spire, familiar to anyone who visited the world-famous attraction.

“These, as they are so well known and documented and photographed, can at some point be replaced, but it won’t be the 13th and 14th century craftsmanship that was such a spectacular sight to behold,” he said.

Although the cathedral welcomed up to 14 million visitors from around the globe every year, it was also a “busy diocesan cathedral” and “extraordinary living house of faith” for the people of Paris, as well as being a venue for national events, said the monsignor.

France has thanked Ireland for its part in an “incredible wave of solidarity” over the fire.

Lionel Paradisi-Coulouma, deputy head of mission at the French Embassy in Ireland, said his country has been very moved by the global outpouring of support.

“We are very moved by the solidarity of the Irish people and the Irish authorities,” he said.

“Thank you very much once again - because it is very, very moving.”

Mr Paradisi-Coulouma said watching images from Dublin of the cathedral burning in Paris left him with “immense sadness and a feeling of shock”.

But he said, by the will of the French nation, work would soon begin to raise it again from the ashes.

Victor Hugo’s Hunchback of Notre Dame in 1831 was a “turning point” in raising solidarity and funding for renovation works during the 19th century, he said, adding: “Now it is time once again to renew the building, to rebuild.”