Hizbullah-backed academic set to be prime minister of Lebanon 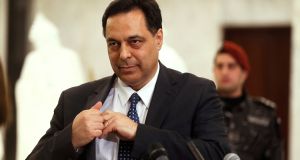 Academic Hassan Diab was named Lebanon’s new prime minister on Thursday after Saad Hariri, who resigned at the end of October, withdrew his candidacy.

A low-profile engineering professor who briefly served as education minister, Dr Diab (60) enjoys the support of the largest parliamentary faction which, with 70 of the 128 seats, includes the Maronite Catholic Free Patriotic Movement of president Michel Aoun; the Amal Movement, which has a Shia support base; and Hizbullah.

He is backed by by one political bloc and received only a slender majority of 69 votes from legislators. Although the post of prime minister is reserved for a Sunni under Lebanon’s sectarian system of governance, he does not have Sunni support – which gives rise to the risk of division and tension.

Furthermore, if the dominant bloc insists that veteran politicians must join technocrats in the new government, Dr Diab could be rejected by protesters. Hundreds of thousands of Lebanese have taken to the streets since mid-October to demand an end to mismanagement and corruption, the ousting of the political elite, and transformation of Lebanon into a secular democracy.

Mr Hariri, who commands the main Sunni faction, stepped down when he failed to convince the majority bloc to agree to the establishment of a purely technocratic cabinet, which he said was the “only option to address the serious social and economic crisis our country faces”.

Lebanon cannot afford to delay formation of a government to tackle the country’s deepening political and economic crises. From the outset the anti-sectarian, nationalist protest movement has been assaulted by Amal and Hizbullah thugs who seek to preserve the sectarian status quo.

Violence escalated last weekend when thugs invaded central Beirut and assaulted the protest camp before turning on security forces deployed to protect demonstrators. Cement slab barricades later erected to control access to the square have been criticised by protesters as a means to curb demonstrations.

Thugs have also mounted attacks in the southern city of Sidon, struck at the home of the leading Sunni cleric in the northern port of Tripoli, and torched the Christmas tree at the city centre.

Lebanon’s economy is collapsing. The World Bank warns the country is in recession and estimates the number of Lebanese living in poverty could rise from 30 to 50 per cent of the population. The Lebanese pound has lost a third of its value and dollars, formerly circulating alongside the local currency, are being rationed.

Importers complain banks do not provide dollars for buying medications and food. Firms are laying off employees and cutting salaries. Children are shifting from private to public schools.

Although the Trump administration has released $115 million (€103 million) in economic aid, which had been held up along with $105 million destined for the army, the injection of dollars is a drop in the bucket as Lebanon’s debt stands at $86 billion, the third highest in the world.