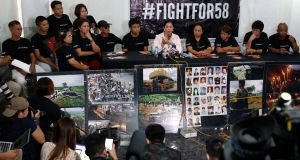 Relatives of victims accompanied by a private prosecutor hold a press conference after the promulgation of the Maguindanao Massacre case in Taguig City, Philippines. Photograph: Rolex Dela Pena/EPA

A Philippine court found the bosses of an influential political clan guilty on Thursday of masterminding a 2009 massacre of 57 people, a ruling cheered as a partial victory for justice and a challenge to the country’s notorious culture of impunity.

Eight members of the powerful Ampatuan family were among 28 people sentenced to life imprisonment over their roles in a ambush on an election motorcade in Maguindanao province, and the gunning-down of all who witnessed it.

Among the victims of the “Maguindanao Massacre” were 32 journalists in what was one of the world’s single biggest attacks on media.

The ambush was also the biggest instance of election violence in the Philippines, where assassinations are common in provincial politics, especially in Mindanao, a southern region prone to lawlessness and the rule of warlords aided by abundant arms.

Trial of the decade

The case was widely considered the trial of the decade in the Philippines due to the infamy of the Ampatuans, a dynasty with political connections that went all the way up to then President Gloria Macapagal Arroyo.

It was also seen as a test of whether democratic institutions could withstand pressure from rich and powerful interests.

Fifteen other defendants were jailed on Thursday for accessory to murder and 56 were acquitted. Seven cases were dismissed, among them that of family patriarch, Andal Ampatuan, who died in prison of a heart attack in 2015.

Salvador Panelo, spokesman for president Rodrigo Duterte, said the ruling should be respected and the massacre represented a “merciless disregard for the sacredness of human life” and should never be repeated.

More than 80 of 197 suspects are still at large, including 12 Ampatuans, raising concerns that witnesses and victims’ families might never be safe.

“This case has a long way to go,” said Esmael Mangudadatu, a congressman whose wife was shot more than a dozen times during the ambush.

“But at least we have a partial victory.”

Mangudadatu was the challenger to the Ampatuans in a gubernatorial election but was not in the convoy attacked in broad daylight by his rival’s private army.

The victims were executed beside a rural road in volleys of gunfire, before being buried with their vehicles in a huge pit dug by an excavator.

The trial involved 357 witnesses and 238 volumes of documents and dragged on for a decade, with much time lost to deliberations over bail requests.

Several witnesses were assassinated, according to activists.

Rights group Amnesty International hailed the verdict as a positive step but said suspects at large should be prosecuted and an end brought to an “appalling culture of impunity and injustice”.

“This verdict should prompt the country’s political leaders to finally act to end state support for ‘private armies’ and militias that promotes the political warlordism that gave rise to the Ampatuans,” said the group’s deputy Asia director, Phil Robertson. – Reuters