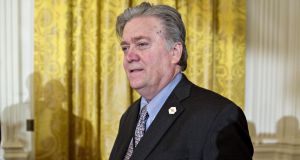 For the first 10 weeks of US president Donald Trump’s administration, no adviser loomed larger in the public imagination than Stephen Bannon, the raw and rumpled former chairman of Breitbart News who considers himself a “virulently anti-establishment” revolutionary out to destroy the “administrative state”.

But behind the scenes, White House officials said, the ideologist who enjoyed the president’s confidence has become increasingly embattled as other advisers, including Trump’s daughter and son-in-law, complained about setbacks on healthcare and immigration. Lately, Bannon has been conspicuously absent from some meetings. And now he has lost his seat at the national security table.

In a move that was widely seen as a sign of changing fortunes, Trump on Wednesday removed Bannon, his chief strategist, from the cabinet-level national security council’s “principals committee”. The shift was orchestrated by Lt Gen HR McMaster, Trump’s national security adviser, who insisted on purging a political adviser from the situation room where decisions about war and peace are made.

Bannon resisted the move, even at one point threatening to quit if it went forward, according to one White House official, who like others insisted on anonymity to discuss internal deliberations. Bannon’s camp denied that he had threatened to resign and spent the day spreading the word that the shift was a natural evolution, not a signal of any diminution of his outsize influence.

His allies said privately that Bannon was put on the principals committee to keep an eye on Trump’s first national security adviser, Michael Flynn, a retired three-star general who lasted just 24 days before being forced out for misleading vice-president Mike Pence and other White House officials about what he had discussed with Russia’s ambassador. With Flynn gone, these allies said, there was no need for Bannon to remain, but they noted that he had kept his security clearance.

“Susan Rice operationalised the NSC during the last administration,” Bannon said in a statement, referring to President Barack Obama’s last national security adviser. “I was put on the NSC with Gen Flynn to ensure that it was de-operationalised. Gen McMaster has returned the NSC to its proper function.”

Bannon did not explain what he meant by operationalise or how his presence on the committee ensured it would not be. Either way, it was one more drama in a White House consumed with palace intrigue, where competing figures jockey for the ear of the president, angle for authority and seek to place blame for a series of political defeats.

Even as Bannon lost a national security credential, Jared Kushner, the president’s son-in-law and senior adviser, seems to be acting as a shadow secretary of state, visiting Iraq and taking on China, Mexico and Middle East portfolios.

Bannon’s myriad enemies, both inside and outside the White House, celebrated what they saw as a defeat for his brand of firebrand politics. “He didn’t belong on the principals committee to begin with – doesn’t really belong in the White House at all,” said Rep Adam Schiff of California, the ranking Democrat on the House Intelligence Committee. “I hope that this is a sign that McMaster is taking control of the national security council.”

Karl Rove, who as senior adviser to President George W Bush was not allowed to join national security meetings, said Bannon’s removal was a move back to a better process. “It was wrong for him to be added in the first place, and it was right to take him off,” he said. Even if Bannon really were removed because there was no longer a need for someone to mind Flynn, Rove added, the end result represented a victory for McMaster.

“It’s either a sign of McMaster’s strength, or the result is it strengthens McMaster,” he said.

Still, Bannon, who has been under attack from outside the administration since the early days of the transition, is a crafty survivor and insiders warned that it would be a mistake to underestimate him. When McMaster wanted to fire a staff member, Ezra Cohen-Watnick, Bannon intervened to save his job.

Cohen-Watnick had alerted colleagues that Trump’s associates had been caught up in the surveillance of foreigners, information that was then shown by another White House official to Representative Devin Nunes (Republican, California), chairman of the House Intelligence Committee investigating Russian meddling in last year’s election.

James Jeffrey, a deputy national security adviser to Bush, said it appeared that McMaster “scored one on the presumably more powerful Bannon”, but cautioned against reading too much into what it meant for Bannon’s status. “He seems to be very close to the president and by most accounts still wins many of his battles,” Jeffrey said.

From the start, McMaster intended to revamp the national security council organisation that he inherited from Flynn. The principals committee, led by the national security adviser and including the vice-president, secretary of state, defence secretary and others, is the primary policymaking body deciding questions that do not rise to the level of the president and framing those that do.

The original organisation approved by Trump not only gave Bannon formal membership on the committee, it downgraded the chairman of the joint chiefs of staff and the director of national intelligence to occasional participants as issues demanded.

In addition to removing Bannon, the new order issued by Trump, dated Tuesday and made public on Wednesday, restored the joint chiefs chairman and intelligence director while also adding the energy secretary, CIA director and United Nations ambassador. It also put the homeland security council under McMaster rather than making it a separate entity, as Trump’s original order had done.

Trump was angry over the fallout from his first order, feeling that he had not been properly warned about its implications. He briefly considered reversing it the same weekend it was announced, according to a person with direct knowledge, but decided against it for fear of creating more of a public storm.

For the first two months of Trump’s presidency, Bannon occupied an unassailable perch at the president’s side – ramming through key elements of his eclectic and hard-edge populist agenda, including two executive orders on freezing immigration from several predominantly Muslim countries. Trump viewed Bannon as a street-fighting kindred spirit who favoured his own attack-when-attacked communications strategy.

But blunders by Bannon’s team – especially the first immigration order that was rejected by multiple courts – have undermined his position. His take-no-prisoners style was not a winning strategy on Capitol Hill. More experienced politicians, including Pence and Trump’s budget director, Mick Mulvaney, stepped into more expansive roles as the negotiations over the failed healthcare overhaul dragged on.

Take it or leave it

Trump initially supported Bannon’s take-it-or-leave-it final message to holdouts in the House Freedom Caucus. But needing a win, Trump grew sceptical and authorised Pence to resume healthcare talks, with Bannon playing more of a supporting role, according to three people close to Trump.

Bannon has also been at odds with Gary Cohn, the president’s national economics adviser. Cohn is close with Kushner, who in private conversations has told people that he fears that Bannon plays to the president’s worst impulses, according to people with direct knowledge of such discussions.

Moreover, Bannon’s Svengali-style reputation has chafed on a president who sees himself as the West Wing’s only leading man. Several associates said the president had quietly expressed annoyance over the credit Bannon had received for setting the agenda – and he was not pleased at a Time magazine cover featuring “President Bannon”.

Yet there is a risk for Trump in appearing to minimise Bannon, a hero to the nationalist, anti-immigration base that helped drive Trump to an Electoral College victory. With his approval ratings at historic lows for so early in a presidency, Trump is counting on the same people who see Bannon as their champion – just as Bannon is counting on Trump to retain his place in the White House inner circle.