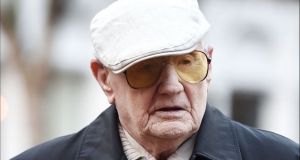 Ralph Clarke is believed to be the oldest person ever convicted in the UK.

Two paedophiles, aged 101 and 96, have lost their appeals in England against sentences which they said were excessive because of their extreme old age.

Ralph Clarke was jailed for 13 years in December for a string of historic sex offences against three young children.

The former haulier, of Erdington, Birmingham, who showed no remorse, is thought to be the oldest person ever convicted in the UK.

In February, retired GP Peter Cooper, of Minehead, Somerset, began a three-year jail sentence for historic sex offences against a girl which started when she was six.

Their lawyers told the Court of Appeal that the sentence passed should be one where it could be reasonably expected that the offender will serve the requisite custodial period.

If this was not the case, the court was passing something akin to a whole life sentence when the offender had not been sentenced in that way. They emphasised the vulnerability of extreme old age and asked the court to treat old people as if they were terminally ill.

It was suggested they should be treated as a special class of offender like those under 18 and the mentally disordered — each of whom was subject to special consideration in sentencing.

On Thursday, five judges headed by Lady Justice Hallett said sentencing the very old must be done on a case-by-case basis and the court would require information specific to the particular offender. Treating the aged like the terminally ill was to approach the matter by reference to the general rather than the specific.

And the argument that old age should be a special category, as for offenders under 18 or with mental disorders, foundered on the fact that they were treated differently because their culpability was reduced.

The relatively recent rise in numbers of older offenders had led to a degree of expertise being acquired by the Prison Service and courts should proceed on the basis that appropriate provision could be made.

The judges said the approach of taking the factors of extreme old age and health into account in a limited way was the correct one.

“We are not persuaded that there should be any change in the position. Whilst we consider that an offender’s diminished life expectancy, his age, health and the prospect of dying in prison are factors legitimately to be taken into account in passing sentence, they have to be balanced against the gravity of the offending — including the harm done to victims — and the public interest in setting appropriate punishment for very serious crimes.”

They said both Clarke and Cooper were relatively fit and each had lived independently without any major health issue.

Having regard to the circumstances of Clarke’s offending and his age and “relatively sprightly” condition, the sentence was not manifestly excessive.

In Cooper’s case, a custodial term of three years for offences of such seriousness could not be described as excessive, even for a man of 96.