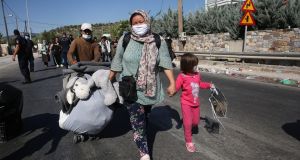 Asylum seekers on a roadside near the Moria refugees camp that was destroyed in a fire earlier this month, on Lesbos island, Greece. Photograph: Orestis Panagiotou/EPA

New proposals to bring an end to overcrowded encampments of people living in desperate conditions on the fringes of Europe were unveiled in Brussels on Wednesday in a bid to break years of deadlock over how to manage migration into the EU.

The plans set out by the European Commission involve quickly sending home people whose claims for asylum are rejected, in a compromise package aimed at reducing irregular migration and reassuring eastern and northern countries that are fiercely opposed to accepting a quota of refugees.

Plans to create a more coherent system of managing migration into the European Union have stalled since 2016, to the frustration of border countries such as Italy and Greece who have long called for more help to deal with what they consider an outsize burden of arrivals that has caused a bottleneck on their shores.

A fire that tore through the Moria encampment on the Greek island of Lesbos earlier this month turned thousands of people out on to the roads without food or shelter, adding fresh urgency to attempts to reach a deal.

“Moria is a stark reminder that the clock has run out on how long we can live in a house half-built,” said Margaritis Schinas, European Commission vice-president charged with promoting “Europe’s way of life”.

“The pact provides the missing pieces of the puzzle for a comprehensive approach to migration,” he said.

National leaders have long acknowledged that the migration system needs reform but have struggled to agree on how to do it, and the new proposals are likely to be the subject of fierce debate, pitting border states looking for more help against hardline governments opposed to immigration, such as Hungary and Poland.

Home affairs commissioner Ylva Johansson emphasised that the number of irregular arrivals into the EU had fallen to 140,000 last year – a small fraction of overall migration – and that the majority of those given residence permits were the spouses of European citizens.

“Sometimes in a debate we try to make a link between migration and crisis. But most of the migrants that come to the European Union come here legally,” she said. “Migration is normal. Migration has always been here, migration will always be here.”

Under the proposals, all irregular migrants who arrive in the EU would be subject to a screening process that would take a maximum of five days. Those who have arrived from countries with a low rate of successful asylum claims – below 20 per cent – would be fast-tracked and likely be quickly deported, the commission said.

Countries that do not accept the return of their citizens could be penalised on visa applications into the EU, while those who accept deportees could be treated favourably.

All member states must agree to play a role in helping to manage migration under the plans, but there are alternative options for member states who refuse to take in a quota of refugees. Instead, those member states can take over responsibility for deporting failed asylum seekers to their home country.

Rights groups criticised the plan as pandering too much to the wishes of member states with anti-immigration governments.

The Catholic Church’s humanitarian network Caritas Europa expressed concerns that the plan’s “top priorities seem to be deterrence, preventing migration to the EU” and that the strengthening of asylum and return procedures could come “at the cost of asylum and human rights safeguards”.